EXCLUSIVE: Listen to the Theme from ‘He-Man and the Masters of the Universe’

Premiering September 16 on Netflix, the new CG animated series from Mattel Television offers a fresh, stylized take on the world of Eternia; composed by Michael Kramer, the original soundtrack, with 37 tracks from the series, debuts September 17. 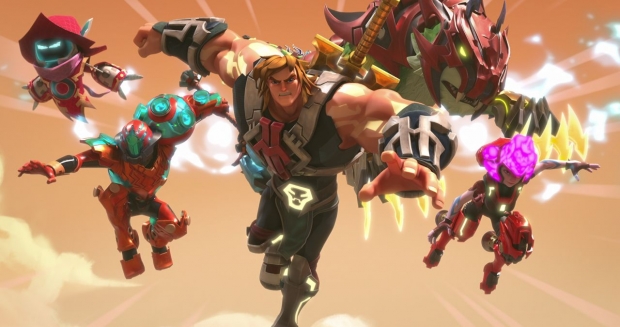 Netflix’s new He-Man and the Masters of the Universe CG animated series debuts tomorrow, September 16, and Mattel Television has shared with AWN an exclusive track, “The Power is Ours,” the show’s theme song - written by platinum producer and songwriter Ali Dee - and one of 37 being released on the original soundtrack, from Warner Music Group, available September 17.

Scored by twice Emmy-nominated composer Michael Kramer (Ninjago, Lego Star Wars), the series offers a fresh, stylized take on the world of Eternia that’s designed to reflect the sensibilities and aspirations of today’s kids. It also further expands upon the franchise’s core message: we all have the power to become the best version of ourselves.

Kramer’s credits include music for Marvel’s Thor: The Dark World, Disney’s Star Wars: Galaxy’s Edge, and video games such as Assassin’s Creed: Black Flag. Dee has written and produced hit songs for a wide variety of artists including Miley Cyrus and Shakira as well as soundtracks for Marvel’s Iron Man and 20th Century Fox’s Alvin And The Chipmunks).

Have a listen! You can pre-save the album here:

Masters of the Universe · The Power Is Ours

Reflecting on scoring the series, Kramer said, “Whether it was programming custom 80s synth patches for He-Man, banging out the wild drums of the Tiger Tribe, or screaming into the microphone to capture the pure evil of Skeletor, the vast mythology and cast of characters of MOTU never failed to inspire. I’m so grateful to Mattel’s Rob David and the entire creative team - their brilliant work motivated and empowered me with the freedom to explore beyond the edges of the map. I hope the melodies and colors of the score help kids (and parents!) fall in love with this universe as much as I have.”

The series tells the story of Eternia, the first planet of creation, where a demonic tyrant rises: Skeletor! With dark armies at his command, Skeletor is on the march, hell-bent on capturing Eternia’s kingdoms, and its ultimate prize – Castle Grayskull, the ancient fortress of mystery said to contain the greatest power in the universe. It’s up to He-Man and his brave squad of rookie heroes to stop Skeletor and restore the peace. Both sides come armed with enchanted Power Weapons – transforming them into Masters of the Primal Powers of the Universe. It’s Master vs. Dark Master, He-Man vs. Skeletor – fighting for control of Eternia, Castle Grayskull, and the fate of us all. In the end, who will become MASTER OF THE UNIVERSE?