EXCLUSIVE: Listen to ‘The Sneak Song’ From Aardman’s ‘Robin Robin’ 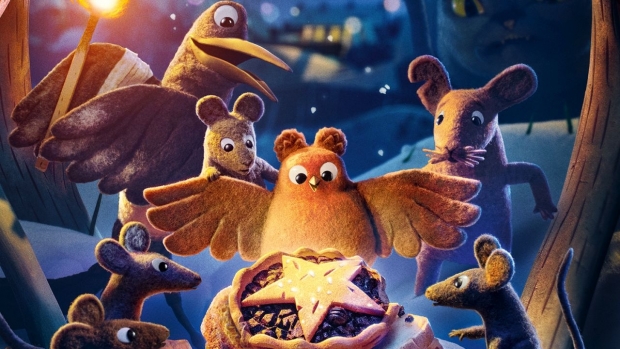 Have a listen to AWN’s exclusive post of “The Sneak Song,” to wet your appetite for what’s in store come tomorrow!

The 30-minute special tells the tale of a small bird with a very big heart. After a shaky nativity of her own – her unhatched egg falls out of the nest and into a rubbish dumpster – she comes out of her shell, in more ways than one, and is adopted by a loving family of burglar mice. More beak and feathers than fur, tail and ears, more cluck and klutz than tip-toe and stealth, she is nonetheless beloved by her adopted family, a Dad Mouse and four siblings.

As she grows up, though, her differences make her something of a liability, especially when the family take her on furtive food raids to the houses of the humans (pronounced ‘Who-mans’) in the dead of night.

Neither fully bird, nor fully mouse, Robin embarks on a food heist of her own to prove herself worthy of her family and also, hopefully, to bring them back a Christmas sandwich. Along the way, she encounters a curmudgeonly magpie who has a house full of glittery things that he’s stolen and, as it turns out, an unlikely heart of gold. He has set that heart on stealing the sparkling star from the top of a local who-man family’s Christmas tree. And who better to help him than the eternally optimistic Robin herself. The adventure brings them face-to-terrifying-face with a menacing, yet very cool Cat, who has a warm place for birds and mice alike: her tummy.

Can they survive? Can they bring home the sandwich and the star? And, most of all, can Robin discover, and learn to love, who she really is, delighting her family and earning her wings in the process?

Notes Ben Please, “I'd been collaborating on shorter animations with my brother for the last 16 years, so when Mikey and Dan asked us to write the music for Robin Robin it felt like the dream culmination of that journey. It was a rare opportunity to properly explore and develop a weave of character’s musical themes over a longer form than we'd done before, with the strength and enthusiasm of Aardman's amazing team carrying us the whole way. I literally spent most of the last two years with Gillian whispering in my ear pretending to be an evil cat, so I count myself very lucky."

Added Dan Ojari & Mikey Please, “It was a huge pleasure to continue our long history of collaboration with the Bookshop Band on Robin Robin, our most ambitious project to date. Beth and Ben are tremendous talents, and we feel very lucky to have been able to work with them from the very early stages of development, so that story and music could feed back and forth and enrich each other. Their warm earthy melodies and folk-inspired instrumentation, with the orchestral backing, was the perfect fit for the world of Robin Robin. We’re excited about the soundtrack release so that listeners can close their eyes and be taken on a fabulous audio journey through that landscape, that is as grand and grounded as the film itself.”