The two-person animation team of Ron Hill and Jeff Maccubbin’s apocalyptic, self-proclaimed ‘Next Stoner Cult-Classic’ animated comedy features sentient machines who are left to piece together 21st century human existence after humankind has bit the dust; all-new episode coming April 6 on WOW Plus. 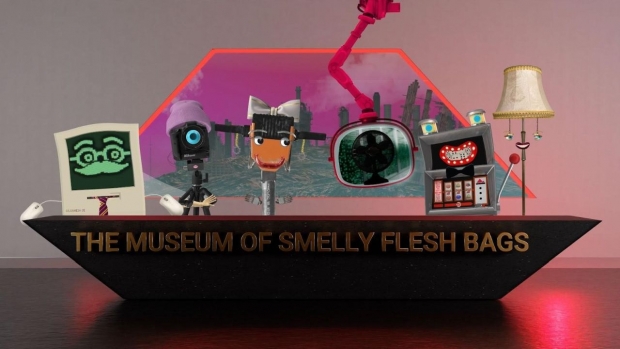 The creators of the new absurdist animated comedy series Why R Humans? have shared an exclusive clip with AWN in anticipation of Episode 2 airing tomorrow, April 6 on WOW Plus. The 4-part series premiered March 30 with new episodes dropping weekly.

In the series, the apocalypse has come, the humans are dead, and a sentient slot machine, lamp and jackhammer are all that is left to piece together the mysteries of 21st century human existence. To make sense of their makers, the robots delve into ancient video chats of human celebrities sharing salacious stories of sex, love, and money leaving the robots to ask themselves in an all-new comedy series from World of Wonder, Why R Humans?

In the exclusive clip Why R Humans 102...? meet the sentient robots who explore friendship, loneliness, and human’s obsessive use of money.

The series’ creators, Hill and Maccubbin, are a two-man shop, working from home. They used Adobe Character Animator for the actual character animation and relied heavily on extensive use of stock photos, video, and 3D models which they deemed as essential.  Together they do all the writing, animation, editing, and voice work themselves – all four episodes took about 10 weeks to produce. including additional character setup and preparation

Describing their process, Hill and Maccubbin shared, “Once it's set up, Character Animator can use input from your webcam to control the character. So, we're able to build and iterate on scenes super quickly! Especially since we do the voices as well. It's pretty trivial to swap out a line or go a different direction with the scene if it's not working.”

They continued, “Once we render the characters out of Character Animator, we toss them into Premiere and position them inside of 2D renders of 3D sets that we made in Blender. It's very much cobbled together but somehow it works!”

Discussing style choice, they explain that the look of the show was born of necessity, noting, “From the beginning we knew that we were going to build the characters using pieces of stock photos and 3D models. And the 3D environment that we were placing the characters in needed to be a little stripped down because, well, this was our first attempt at anything like it!”

Each episode has been an evolution as the pair have gotten more ambitious, using a wider variety of camera angles and new complicated characters. Summing up the production, Hill and Maccubbin say, “We're learning so much week to week and we think it shows.”