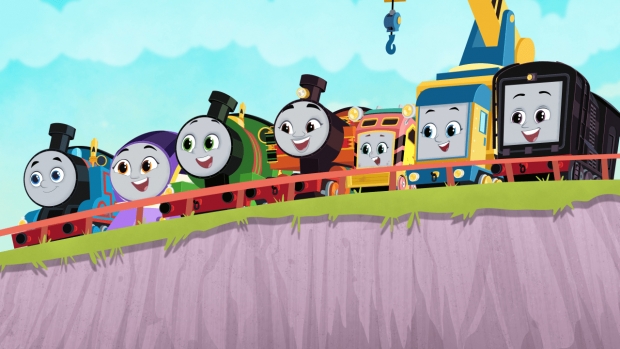 The new series follows Thomas, more playful and relatable than ever before, as the hero of his own adventure; he strives to be the Number One Tank Engine through trial and error, all while just enjoying being a kid. Of course, Thomas will always have his friends by his side for every adventure. Each episode includes a life lesson important for preschool-age children, such as facing fears, being a good friend, and learning that you don’t always have to solve problems alone.

To tease tomorrow’s debut, Mattel has shared with AWN an exclusive clip, “Thomas & the Missing Cargo”:

Thomas & Friends: All Engines Go’s new format includes a greater range of character expressiveness, more physical comedy and music, and core characters that are now kids themselves, voiced by kid actors. The upbeat and colorful show is crafted to appeal to contemporary audiences’ sensibilities while maintaining Thomas’ core message about the value of friendship.

The show incorporates 26 social-emotional, cognitive, and physical life lessons throughout, including friendship, taking turns, teamwork, self-help, and empathy. Thomas will be center stage; we will see the world through his young eyes as he strives to be the Number One Tank Engine through trial and error, all while just enjoying being a kid.

“This new creative direction for the classic Thomas & Friends franchise is crafted to appeal to contemporary audiences, yet still maintain the beloved characters’ core ethos: the value of friendship.” According to Fred Soulie, Senior Vice President and General Manager, Mattel Television, “Thomas & Friends: All Engines Go features stories that are both timeless and timely,  with themes that will resonate with children, parents and caregivers alike.”

“We can’t wait for the next generation of fans to meet Thomas and his friends,” added Christopher Keenan, Senior Vice President, Global Content & Executive Producer, Mattel Television. “In Thomas & Friends: All Engines Go, we aim for audiences to have fun as we expand the world of Sodor in new and exciting ways.”

Thomas is joined on the show by four new engines:

Fred Soulie (He-Man and the Masters of the Universe) and Christopher Keenan (Thomas & Friends) serve as executive producers for Mattel, with Pam Westman, Colin Bohm and Doug Murphy (Corn & Peg) executive producing for Nelvana. The show was developed by Rick Suvalle (Mission Force One). The animation is produced by Nelvana Studio.