The sci-fi star voices Rick, the scruffy owner of a beat-up van parked in front of the Green’s house, in new episode premiering March 27; Emmy-nominated animated comedy was recently renewed for a third season on Disney Channel. 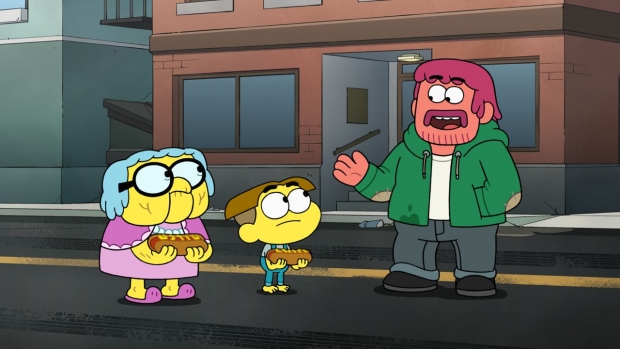 In the new episode, premiering tomorrow, March 27 on Disney Channel, Harbour voices Rick, the scruffy owner of a run-down old van parked in front of the Green’s house. He finally comes to retrieve his vehicle, only to find it missing. To avoid getting caught, Cricket and Gramma offer to help him find the van.

The Emmy Award-nominated series, recently picked up for a third season, is created and executive produced by brothers Chris and Shane Houghton. It follows mischievous and optimistic 10-year-old Cricket Green, who moves from the country to the big city with his wildly out of place family—older sister Tilly, father Bill and Gramma Alice. Cricket’s natural curiosity and enthusiasm lead him and his family on epic journeys and into the hearts of his new neighbors. The show’s voice cast includes Chris Houghton as Cricket Green, Artemis Pebdani (Scandal) as sweet Gramma Alice, Marieve Herington (How I Met Your Mother) as quirky older sister Tilly Green and Bob Joles (Puss in Boots) as hard-working father Bill Green.