Is there a sinister plan to rig the lottery for better crew quarters? In tomorrow’s all-new episode on Paramount+, ‘Room for Growth,’ Mariner, Boimler, and Tendi clash with their arch-rivals as Delta Shift and the Cerritos engineers go on mandatory relaxation leave; get a jump on tomorrow's episode and watch AWN’s sneak peek ‘Room Lottery.’ 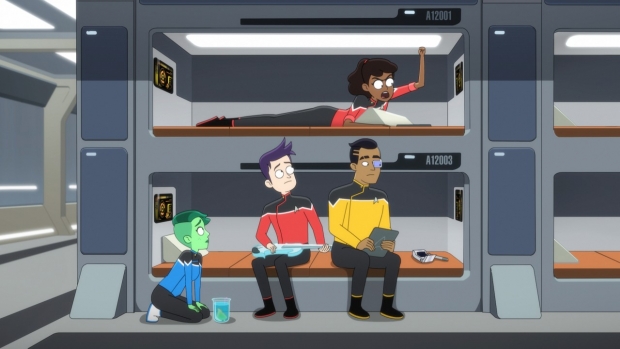 Good morning, Trekkies! While still floating in my post “Star Trek Day” fog, I was overcome with surprise and delight, when our good friends at Paramount+ offered AWN (drum roll please!) an exclusive Star Trek: Lower Decks clip (below) to share with our readers ahead of tomorrow’s streaming debut of episode 304, "Room for Growth.”

In episode 304, “Room for Growth” Mariner, Boimler, and Tendi clash with their arch-rivals: Delta Shift and the Cerritos engineers go on mandatory relaxation leave.

Get a peek into tomorrow’s episode with AWN’s exclusive clip, “Room Lottery.” In the clip, the crew vies for available quarters on lauded deck 1. However, they’re resigned to a lottery system that never favors them. But some crew members have a more sinister plan - altering the lottery’s algorithm to ensure them a spot in the coveted digs.

Star Trek: Lower Decks streams exclusively on Paramount+ in the U.S. and Latin America and is distributed concurrently by Paramount Global Content Distribution on Amazon Prime Video in Australia, New Zealand, Europe, Japan, and India. In Canada, the project airs on Bell Media’s CTV Sci-Fi Channel and streams on Crave.