Launching October 4 on VOD and in select U.S. theatres, animated feature tells the story of young girl’s quest to unravel a set of mysterious kidnappings in turn-of-the-century Paris. 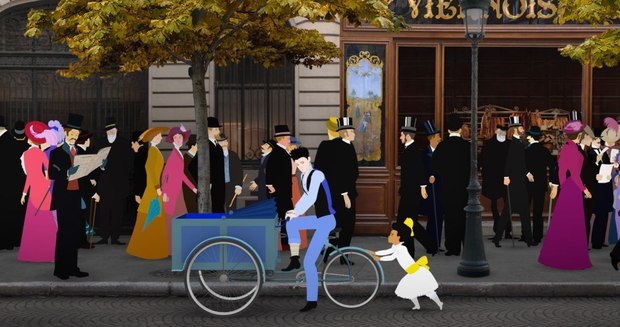 Dilili in Paris, Michel Ocelot’s animated tale that opened the 2018 Annecy Animation Festival to a standing ovation, is coming to VOD and select theatres October 4.  Set in Belle Epoque Paris at the cusp of the twentieth century, the film follows Dilili, a graceful young Kanak girl from the southwest Pacific islands, as she tries to unravel the mystery behind numerous kidnappings of young girls. Together with Orel, a delivery boy who ferries her around the sweeping photorealistic and jewel-toned Parisian landscape, Dilili will stop at nothing while investigating the mysterious plot of the Male Masters, who are snatching girls for their dark practices.

As the super sleuths journey through a turn-of-the-century world, you just might spot Picasso, Proust, or Marie Curie. The film is a declaration of love to Paris and an homage to women pioneers, artists and innovative minds touching on timely sociological issues like #MeToo, racism and misogyny, masterfully conveyed through the lens of a child's eye and wonder.

Dilili In Paris - The Most Famous Girl in Paris from Samuel Goldwyn Films on Vimeo.

The film is rich in beautifully rendered period detail, but its story of women victimized by men (“the main evil of the planet,” according to Ocelot) gives the film a contemporary resonance. The director, also known for his films Kirikou and the Sorceress and Azur et Asmar, describes Delili as “something like a fairy tale, except the ‘fairies’ are historical people who have left us a rich and open civilization.”

The film, produced by Samuel Goldwyn Pictures, will be screened at the following theatres: