In back-to-back holiday episodes of the howlingly popular animated comedy airing this Sunday on FOX, Honey’s dream comes true and Chico experiences hunger for the first time, while Elsa falls in love with a robot dog. 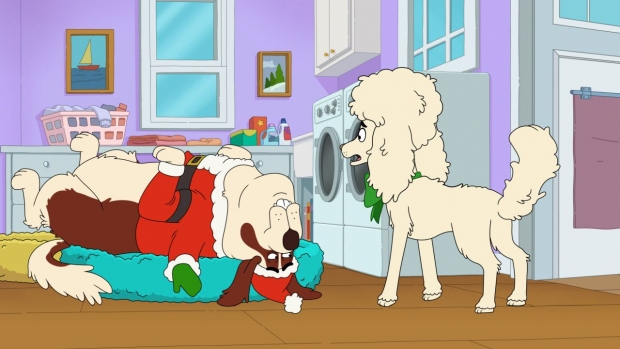 It’s in the air – that holiday spirit (or maybe the lingering aroma of Thanksgiving turkey) – Christmas festivities loom on the horizon. So, it’s almost that time for our favorite animated series to get serious about the holidays. Indeed, our friends at FOX have our back with two all-new holiday episodes of their howlingly popular animated series, HouseBroken, airing back-to-back December 4 – and an exclusive to tide us over to Sunday.

In “Who’s Found Themselves in One of Those Magical Christmas Life Swap Switcheroos?” Honey’s holiday wish comes true when a mix-up at the vet sends her to a dream home, while her idiotic doppelganger goes to live with Chief. Meanwhile, Max has to hide from his new owner David Spade when he discovers that Spade wants to make him the holiday ham. Watch it on FOX, Sunday, December 4 at 8:30/7:30c

In “Who’s Having a Merry Trashmas?” Honey and Chief are home alone for the holidays, and when a mysterious intruder tries to break in, they team up with Raccoon to protect the family home. Meanwhile, Chico experiences hunger for the first time, and Elsa falls in love with a robot dog. Watch it on FOX, Sunday, December 4 at 9:00/8:00c

In the exclusive clip, “Honey Wakes Up in A House More Suited to Her,” Honey wakes up and finds that her holiday wish has been granted – check it out!

In the series, Honey (Kudrow), a standard poodle, opens her living room for the group to come and support each other through the misery, mayhem, and majesty that is being a pet. Honey also struggles with her own problems, such as her arranged (by her human) marriage with Chief (Faxon), a sloppy St. Bernard who enjoys eating socks and licking himself. The group includes Shel (Forte), a sex-positive tortoise with intimacy issues and a knack for choosing unconventional partners; Tabitha (Horgan, who also executive produces), an aging Persian cat beauty queen, trying to adjust to life off the cat show circuit; The Gray One (Mantzoukas), a street smart cat who lives with about thirty other cats and has his one eye on Tabitha; Chico (Richardson), a chonky, co-dependent and very naive cat; and the group’s newest member, Diablo (Hale), an anxious, sweater-wearing terrier whose OCD causes him to hump everything twice.