The new season kicks off with a big musical episode as Judy reaches the monumental milestone of having her braces removed, coming this Sunday, September 26 on FOX. 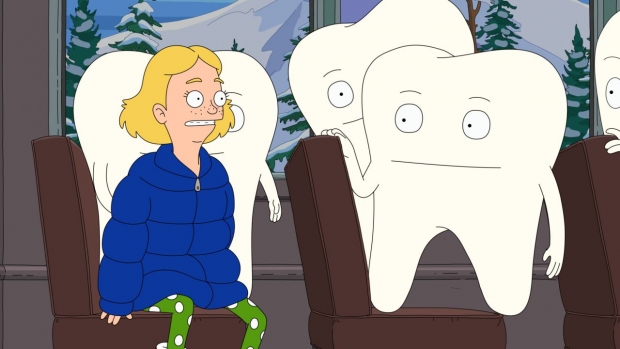 Our friends over at Fox have shared an exclusive clip from the Season 2 premiere of their animated comedy, The Great North, coming this Sunday, September 26 (8:30- 9:00 PM ET/PT). The series, executive produced and showrun by sisters Wendy Molyneux and Lizzie Molyneux-Logelin, has been renewed for another season and is currently in production at Bento Box. The new season also features special holiday-themed episodes, celebrating Halloween, Thanksgiving and Christmas, Tobin-style. Lots to look forward to.

Season 2 kicks off with “Brace/Off Adventure,” a special musical episode where Judy reaches the monumental milestone of getting her braces removed. For those of us that endured the torture of 2+ years of braces, that day is one of the best days ever. Eating toffee, taffy, and gummi bears on the way home from the dentist is an unequaled pleasure.

Wendy and Lizzie told AWN, “When we recorded our theme song, we discovered that literally everyone in the cast could sing and so we couldn’t wait to do a full musical with them. We’re also really excited to tell a story about a teen girl grappling with becoming an adult without making fun of her! But with fart jokes. You can do both!”

In the clip from the first big musical number of the season, “Just One of Those Days,” Judy (Jenny Slate) sings about the joy of having a really great day, farts and all – take a look!

The Great North follows the Alaskan adventures of the Tobin family, as a single dad, Beef (Nick Offerman), does his best to keep his bunch of kids close – especially his only daughter, Judy (Jenny Slate), whose artistic dreams lead her away from the family fishing boat and into the glamorous world of the local mall. Rounding out the family are Judy’s older brother, Wolf (Will Forte), and his new wife, Honybee (Dulcé Sloan), middle brother Ham (Paul Rust) and 10-year-old-going-on-50 little brother Moon (Aparna Nancherla). While their mother is not in the picture, Judy seeks guidance from her new boss, Alyson (Megan Mullally), and her imaginary friend, Alanis Morrissette (voicing as herself), who appears to her in the Northern Lights.