Exclusive Clip: ‘The Great North - A Knife to Remember Adventure’

In the Season 3 premiere airing this Sunday on FOX, Honeybee and Wolf discover an outback-themed restaurant they can’t stop going to, while Beef confronts his fear of small talk. 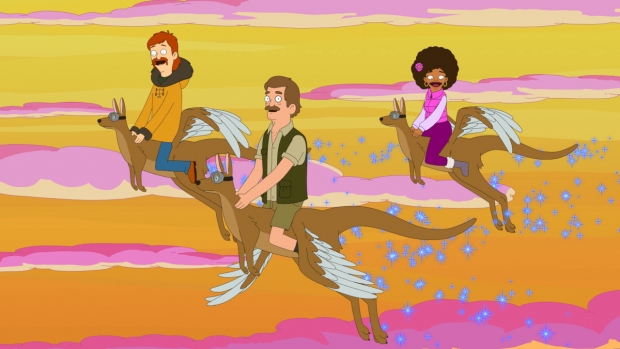 An all-new Season of The Great North is no longer merely around the corner… it’s here this Sunday! And that means our friends at FOX have once again shared an exclusive clip with AWN; we end September with a great musical number from this Sunday’s Season 3 premiere! Don’t forget that the show has been picked up already for Season 4, so there are plenty more clips coming!

In the all-new episode, Honeybee and Wolf discover an outback-themed restaurant they can’t stop going to, and Beef confronts his fear of small talk. Tune in to “A Knife To Remember Adventure,” airing Sunday, Sept. 25 (8:31-9:00 PM ET/PT) on FOX.

The Great North follows the Alaskan adventures of the Tobin family. As a single dad, Beef (Nick Offerman, Parks and Recreation, Making It), does his best to keep his bunch of kids close – especially his only daughter, Judy (Jenny Slate, Bob’s Burgers), whose artistic dreams lead her away from the family fishing boat and into the glamorous world of the local mall. Rounding out the family are Judy’s older brother, Wolf (Will Forte, The Last Man on Earth); his fiancé, Honeybee (Dulcé Sloan, The Daily Show); Judy’s middle brother, Ham (Paul Rust, Love); and ten-year-old-going-on-50 little brother, Moon (Aparna Nancherla, A Simple Favor). While the children’s mother is not in the picture, Judy seeks guidance from her new boss, Alyson (Megan Mullally, Will & Grace), and her imaginary friend, Alanis Morissette (guest-voicing as herself), who appears to her in the Northern Lights.

In the exclusive clip, a fine musical number, “Wolf And Honeybee Visit Crocodile Rob's,” Wolf and Honeybee are stuck in their car in the cold and decide to go to Crocodile Rob's, the bar where Wolf's mom used get drunk… so it’s on his dad's blacklist. But, they're cold, so they go in anyway and it’s an Aussie wonderland! Check it out: