Exclusive Clip: ‘The Great North - Autumn If You Got Em Adventure’

In the all-new episode airing this Sunday on FOX, all the Tobins fall under the spell of the Fall Frenzy Dance – what crazy secrets will be revealed? 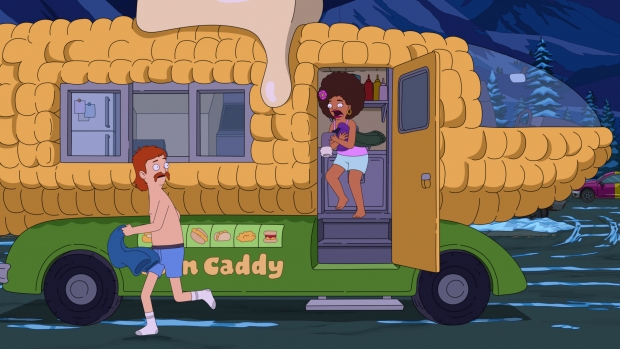 The Great North continues to shine as a bright spot helping us wrap up hopefully enjoyable weekends, and what better way to tease that hope for this coming weekend than to share an exclusive clip from our friends at FOX? And not to disappoint, AWN has indeed received, and now shares, a new clip to which we say, Happy Friday! And don’t forget that the show has been picked up for Season 4, so there’s plenty more clips coming!

In the all-new episode, all the Tobins fall under the spell of the Fall Frenzy Dance. Tune in to “Autumn If You Got Em Adventure,” airing Sunday, October 9 (8:31-9:00 PM ET/PT) on FOX.

The Great North follows the Alaskan adventures of the Tobin family. As a single dad, Beef (Nick Offerman, Parks and Recreation, Making It) does his best to keep his bunch of kids close – especially his only daughter, Judy (Jenny Slate, Bob’s Burgers), whose artistic dreams lead her away from the family fishing boat and into the glamorous world of the local mall. Rounding out the family are Judy’s older brother, Wolf (Will Forte, The Last Man on Earth); his fiancé, Honeybee (Dulcé Sloan, The Daily Show); Judy’s middle brother, Ham (Paul Rust, Love); and ten-year-old-going-on-50 little brother, Moon (Aparna Nancherla, A Simple Favor). While the children’s mother is not in the picture, Judy seeks guidance from her new boss, Alyson (Megan Mullally, Will & Grace), and her imaginary friend, Alanis Morissette (guest-voicing as herself), who appears to her in the Northern Lights.

In the exclusive clip, “Judy Updates Alanis On The Fall Frenzy Dance,” Judy chats it up with the Northern Lights (Morissette) and gives her the latest gossip on the Autumn social event of the year – did Judy really kiss Gill, is Beef a swinger, what’s up with her family going Bonkers in the Conkers? And what’s all this about historical flashbacks? Find out for yourself: