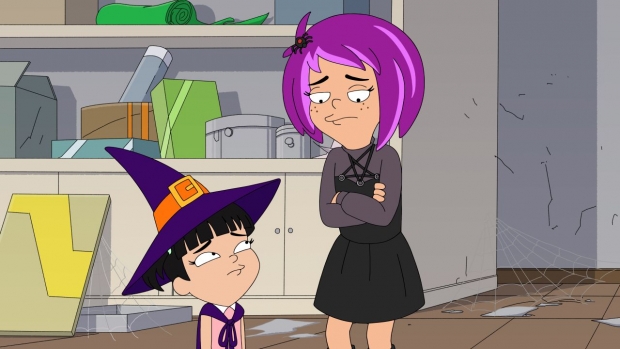 Season 2 of Duncanville sadly comes to end… but we still get one more exclusive clip, this time from the Monday, August 30 season finale, “Witch Day 2.” Animated by Bento Box and produced by 20th Television Animation, Universal Television, and Fox Entertainment, Duncanville is co-created, and executive produced by the Emmy Award-winning husband and wife team of Mike and Julie Scully, and Emmy Award winner Amy Poehler.

In the all-new episode, at the annual Witch Day Festival, Kimberly mixes up a magic witch potion that actually works, causing Jing to become possessed. Duncan and his friends enter a haunted Circuit City and Jack tries again to finally win Annie a stuffed animal at the milk bottle toss.

Regarding Season 2, Mike and Julie Scully tell AWN, “It’s been a great season, starting with the Parks and Rec cast reunion, Duncan telling his dad to ‘F’ off, and fun guest stars such as Stephen King playing himself and Jason Schwartzman playing ‘Uncle Stan.’ The world of the show keeps growing and we hope our audience is as well. We love our cast, writers and crew who worked with us to meet the challenge of producing a show from home.”

In our exclusive clip, “Kimberly’s Coven Sells Potions,” Annie helps Kimberly with her Witch Day booth to sell her potions, which, it turns out, might be more effective than advertised. “Witch Day 2” airs Monday, August 30 (9:31-10:00 PM ET/PT) on FOX.