Hitting Netflix April 8, the new animated series focuses on Barbie BFFs ‘Malibu’ and ‘Brooklyn;’ caught in the bustle of the Big Apple they soon discover the necessity of having friends and family to lean on if they’re going to make their dreams a reality. 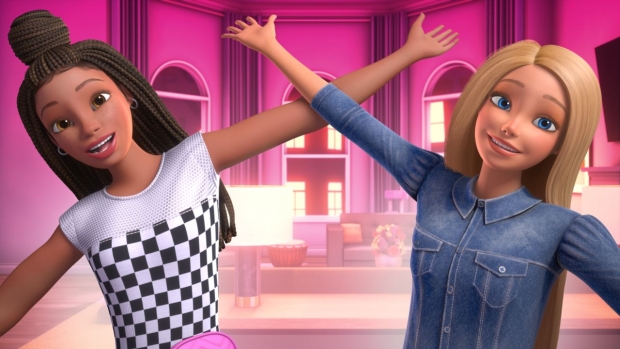 Mattel has shared an exclusive clip with AWN from the all-new animated series, Barbie: It Takes Two, coming to Netflix on April 8. The show premieres with 13 episodes; additional episodes will follow later this year. This marks Barbie’s first full-length television series since the popular Dreamhouse Adventures and follows the original animated movie musical, Barbie: Big City, Big Dreams, now available on the streamer.

In the series, best friends Barbie “Malibu” Roberts and Barbie “Brooklyn” Roberts strive for musical stardom at the prestigious Handler School of Performing Arts in New York City. Caught up in the hustle and bustle of the city that never sleeps, both Barbies soon find that they’ll need to lean on each other, friends old and new, as well as their families if they’re ever going to make their dreams become a reality.

With a focus on friendship, Barbie: It Takes Two showcases the pair’s dynamic and the franchise’s core purpose of self-discovery. The series explores themes of friendship, self-worth, the value of sisterhood and family, and important balance between working hard and having fun.

Featuring brand new music and choreography, the series sets out to entertain audiences of all ages.

In the exclusive clip ‘Barbies Rising,’ Malibu and Brooklyn become determined to get a meeting with famous star-maker and TV/Music media mogul Otto Phoenix:

“We look forward to broadening the scope of Barbie content with our return to the series format,” noted Soulie. “What lies ahead for both Malibu and Brooklyn reinvigorate the brand with a whole new perspective that heightens the sense of adventure, fun and friendships.”

“Barbie has been inspiring, empowering, and entertaining kids for decades,” added Keenan. “With our Barbie content spanning across TV, movies, YouTube and more, we’ve steadily been expanding the Barbie universe that now contains not one but two shining stars, both by the name of Barbie Roberts! With all new music and more exciting adventures, the series follows the girls’ hilarious and empowering adventures in friendship, sisterhood, and family, all while discovering their limitless potential.” Check out the other ways to interact with Barbie: It Takes Two:

Barbie: It Takes Two Soundtrack - Original songs will be available to download or stream at all music retailers on April 8.

Barbie Vlogger on the Barbie YouTube channel – Find exclusive content, character features, and music videos. Barbie Vlogger is an ongoing web-exclusive series where Barbie chats directly with her audiences about everything that is going on in her life. Barbie takes on fun YouTube challenges, shares DIY activities and speaks openly about topics on her mind. Look for new updates every week.