Exclusive: Baobab Studios and John Legend Release ‘When You Can Fly’ Music Video 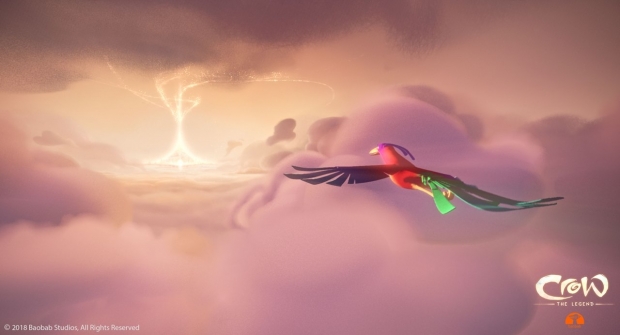 Return to the Heart Foundation is working with grassroots tribal leaders to protect elders and Indigenous wisdom necessary for safeguarding of Mother Earth by supporting the procurement and distribution of personal protective equipment for Native American communities from donations to the Native COVID Action Fund. They are already halfway to their $2 million goal to meet urgent needs, having raised close to $1 million through in-kind donations and private funding.

Written and directed by Baobab co-founder Eric Darnell of Antz and Madagascar fame, and produced by Baobab CEO Maureen Fan (The Dam Keeper), Crow: The Legend is the story of a group of animals tested by the forces of nature when the spirit of the seasons introduces the first-ever winter to their idyllic habitat.  The film was produced by Baobab Studios, Get Lifted, Legend, Ty Stiklorius, Eagle Heart, and Edmonds; its diverse, award-winning ensemble voice cast includes Legend, Oprah Winfrey, Constance Wu (Crazy Rich Asians), Diego Luna (Rogue One: A Star Wars Story), Tye Sheridan (Ready Player One), digital superstar Liza Koshy, and both the project’s cultural advisors: Eagle Heart, an Oglala Lakota social justice storyteller and CEO of Native Americans in Philanthropy; and Edmonds, a Kiowa/Caddo tribal elder, founder of the National Urban Indian Council, and lifelong Native rights crusader.

Check out the music video, as well as Behind the Scenes content, below:

Darnell first encountered the story of the Crow after discovering he was part Native American, which led to a fascination with Native American storytelling. Understanding that the story may not necessarily be his to tell, Darnell enlisted Eagle Heart and Edmonds to provide guidance, support, and their voices to the film in order to keep the legend as authentic as possible.

Both the theatrical short and interactive versions were created using the Unity real-time game engine, marking the first time in Daytime Emmy Award history that an animation created with real time graphics won Outstanding Directing in an Animated Program, along with the special jury prizes for Outstanding Individual Achievement in both Character Design and Production Design.

Read AWN’s coverage of how the film pushed real-time graphics to new heights:
How Baobab Studios Created a Storybook World for the Immersive Crow: The Legend

In releasing the new music video, Fan explains, “Our goal, and the goal of all of our amazing partners, cast and crew, is to get this video out widely and freely as a way to honor our Native American communities during this time of crisis and raise awareness for their immediate need by promoting their Native COVID-19 Action Fund. Crow: The Legend is literally about bringing light back to a world gone dark, so this music video is also a little gift to people of all ages to sing along a new song with John Legend.”

According to The Washington Post, “Entire tribal nations could be wiped out by COVID-19 due to the higher rates of underlying health conditions and lack of access to sufficient health care,” so the film’s creators are releasing the video today to raise further awareness to this cause.  The Native COVID Action Fund’s site further states that “Indian Country was left out of funding of the first two stimulus funding opportunities and for already under resourced communities, this is devastating.” “This singalong video helps to shine a light on Indigenous world view, storytelling and ancestral knowledge critical to the future safekeeping of Mother Earth,” says Eagle Heart, CEO of Return to the Heart Foundation. “And now in the fight with COVID-19, it is a defining moment for allies of Mother Earth and tribal communities to stand with Return to the Heart Foundation in amplifying and donating to our Native COVID Action Fund working to procure emergency Personal Protective Equipment and Rapid Test Kits to the already vulnerable tribal communities.”

“All Native American tales have a tradition of deep meaning and that's why we tell the stories, sharing down the generations,” notes Edmonds, who celebrated his 86th birthday earlier this month. “Many of these stories were historically banned during the reeducation camps and schools Native Americans like myself were brought up by.  During this crisis, we must do everything we can to continue to protect these stories.”

On the heels of Earth Day, Eagle Heart adds, “Protect ancestral knowledge. Stand with us. Fight for Mother Earth.”

You can watch Crow the Legend here - https://youtu.be/KYFrgc6OiLg; the VR experience is free to download here - Crow The Legend VR.