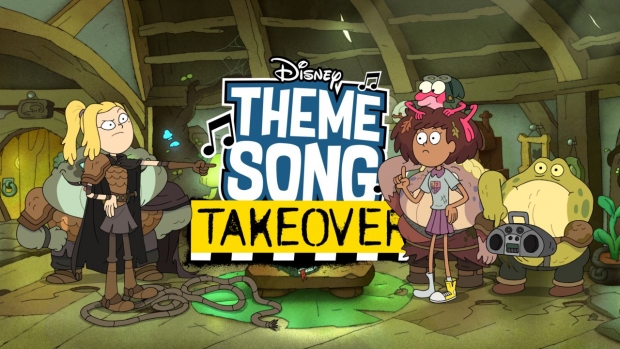 The latest episode of the Disney Channel’s Disney Theme Song Takeover spotlights the popular series Amphibia; the short form musical series stars popular animated characters doing their own unique version of their own shows’ popular theme songs - complete with new lyrics. In “Theme Song Takeover: Sasha Conquers,” Anne’s best friend Sasha (voiced by actress and YouTuber Anna Akana) performs a hard rock version of the Amphibia theme song. In this new cover, she reveals what she was up to with the toads while Anne spent her first couple months in Wartwood.

In season two of Amphibia, Anne and the Plantars are on a quest to unlock the mysteries of the music box as they leave the cozy confines of Wartwood for the distant city of Newtopia. On their journey, they visit exotic new locations, uncover hidden secrets, and experience unexpected reunions as they continue to search for a way to get Anne home.

Brenda Song stars as Anne Boonchuy alongside Justin Felbinger (Disney Junior's Miles From Tomorrowland) as Sprig Plantar, who forges a once-in-a-lifetime friendship with Anne; Amanda Leighton (This Is Us) as unpredictable pollywog (aka tadpole) Polly Plantar, the youngest member of the Plantar family; and Disney’s Bill Farmer (the voice of Goofy) as the overprotective and traditional grandfather Hop Pop.

The series is created and executive-produced by Annie Award-winner Matt Braly (Gravity Falls), inspired by his heritage, family, and childhood trips to Bangkok, Thailand. Viewers can watch season two episodes of Amphibia in the DisneyNOW app.