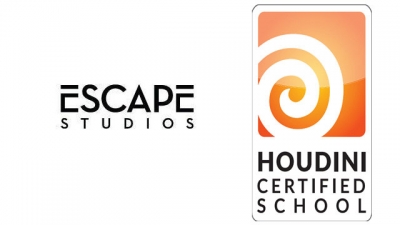 VFX software company, SideFX, has officially recognized Escape Studios as a Houdini Certified School. The software developer and author of Houdini has profiled the studio (part of Pearson College London) on their website, highlighting the school’s excellence in teaching. The studio’s students will now have exclusive access to Houdini webinars, presentations, and real-time feedback sessions for their portfolios.

Developed by SideFX, Houdini is a 3D animation software application used by many of the world’s leading studios for the creation of visual effects in film and games. Escape Studios uses Houdini as part of its teaching of undergraduate and postgraduate degrees, along with its range of short courses.

“We’re thrilled to further cement our relationship with SideFX by becoming a Houdini Certified School,” commented Escape Studios deputy dean, Saint Walker. “Alongside our degree program, we’ve recently been reskilling VFX artists sadly furloughed or out of work in Houdini, so it’s fantastic to gain this certification. This is a wonderful milestone for teachers and students here at Escape Studios, including our head of 3D VFX Mark Spevick, who works closely with SideFX to develop tutorials and demos that are extremely popular on our YouTube channel.”

Escape Studios offer undergraduate, postgraduate, and short courses in Visual Effects (VFX), Game Art, Animation and Motion Graphics. Students get the opportunity to work in industry-style studios using the latest tools and techniques and work as part of a team on high quality creative projects. They have intensive, hands-on tutorials with industry-trained tutors, who, alongside with creative professionals, will provide regular feedback on students’ work.