Veteran animator best known for his work with Walt Disney Animation Studios will teach classes on the fundamentals of character animation beginning in the fall of 2015. 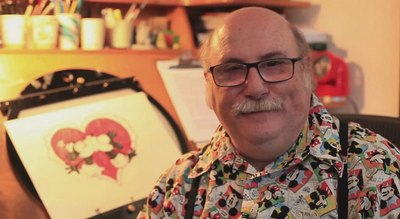 LOS ANGELES, CA -- Veteran animator Eric Goldberg has joined the USC School of Cinematic Arts’ John C. Hench Division of Animation and Digital Arts. Goldberg will teach classes on the fundamentals of character animation beginning in the fall of 2015.

Goldberg is widely known within the international animation community as one of the leading character animators working today. In his forty-year career he has given life to some of cinema’s most beloved animated characters, including Robin Williams' unforgettable Genie in Aladdin, Phil in Hercules, and Louis in the Oscar-nominated Best Animated Feature The Princess and the Frog.

“We are thrilled that Eric is coming aboard,” commented Tom Sito, Chair of SCA’s John C. Hench Division of Animation and Digital Arts, in making the announcement. “His incredible talent, and vast knowledge of character animation gleaned from years working with such masters as Chuck Jones, Richard Williams, Ken Harris, Tissa David and Art Babbitt, will be an invaluable resource to our program.”

Goldberg’s first Disney assignment in 1990 was Supervising Animator of the wisecracking Robin Williams-voiced Genie in Aladdin. Subsequently, he co-directed the successful Pocahontas, and animated the feisty Danny DeVito-voiced satyr Phil in Hercules. Following that he directed two critically acclaimed sequences in Fantasia 2000, “Carnival of the Animals” and “Rhapsody in Blue.” The latter was a labor of love inspired by both George Gershwin and the legendary theatrical caricaturist Al Hirschfeld, who served as artistic consultant on the film.

In 2003, Goldberg served as animation director on Warner Bros.’ live-action/animation feature Looney Tunes: Back in Action, directed by Joe Dante. For the film, he handled the legendary characters Bugs Bunny, Daffy Duck, Elmer Fudd, Wile E. Coyote, Yosemite Sam and the entire Warners stable, as well as providing the voices for Speedy Gonzales, Tweety, and Marvin the Martian.

Most recently Goldberg has been animating at his alma mater, Walt Disney Animation Studios, where he served as Supervising Animator for Louis (the trumpet-playing alligator) in Academy Award Best Animated feature nominee The Princess and the Frog. In addition, he supervised both the character of Rabbit and the “Backson Song” sequence in Winnie the Pooh. He also was the Supervisor of hand-drawn animation in the 2013 Oscar-nominated short film, Get a Horse! Currently, Goldberg is creating exploratory animation for the upcoming Walt Disney Animations Studio feature, Moana.

In February 2011, Eric was awarded the prestigious Winsor McCay award from ASIFA-Hollywood for lifetime achievement in animation.