New release adds increased mobile optimizations to Android and iOS, up to 60 percent speed increases when cooking content, and more power and flexibility in the industry-leading Niagara effects toolset for real-time VFX. 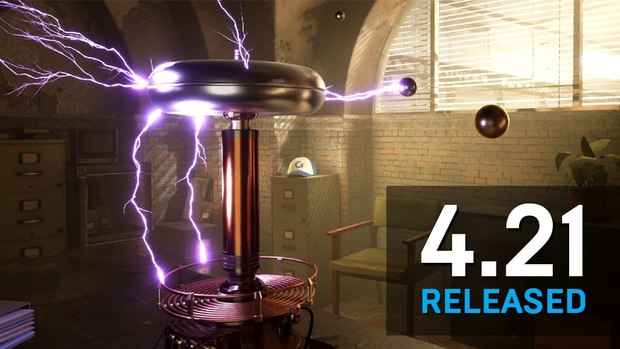 Unreal Engine 4.21 builds upon proven tools for creativity and efficiency, adding even more mobile optimizations to both Android and iOS, up to 60 percent speed increases when cooking content, and more power and flexibility in the industry-leading Niagara effects toolset for real-time VFX. In addition, the new production-ready Replication Graph plugin enables developers to build multiplayer experiences at a scale previously impossible, and Pixel Streaming allows users to stream interactive content directly to remote devices with no compromises on rendering quality.

Key features across Unreal Engine 4.21 include: Sequencer Improvements: New capabilities within Sequencer allow users to record incoming video feeds to disk as OpenEXR frames and create a track in Sequencer, with the ability to edit and scrub the track as usual. This enables users to synchronize video with CG assets and play them back together from the timeline. Pixel Streaming (Early Access): With the new Pixel Streaming feature, users can author interactive experiences such as product configurations or training applications, host them on a cloud-based GPU or local server, and stream them to remove devices via web browser without the need for additional software or porting.

Mobile Optimizations: The mobile development process gets even better thanks to all of the mobile optimizations that were developed for Fortnite’s initial release on Android, in addition to all of the iOS improvements from Epic’s ongoing updates. With the help of Samsung, Unreal Engine 4.21 includes all of the Vulkan engineering and optimization work that was done to help ship Fortnite on the Samsung Galaxy Note 9 and is 100 percent feature compatible with OpenGL ES 3.1. Much Faster Cook Times: With the release of 4.21, the cooking process has been optimized, resulting in up to a 60 percent speed increase in cook times. Low-level code avoids performing unnecessary file system operations, and cooker timers have been streamlined.

Gauntlet Automation Framework (Early access): The new Gauntlet automation framework enables developers to automate the process of deploying builds to devices, running one or more clients and or/servers, and processing the results. Gauntlet scripts can automatically profile points of interest, validate gameplay logic, check return values from backend APIs, and more! Gauntlet has been battle tested for months in the process of optimizing Fortnite, and is a key part of ensuring it runs smoothly on all platforms. Blackmagic Video Card Support: Unreal Engine 4.21 also adds support for Blackmagic video I/O cards for those working in film and broadcast. Creatives in the space can now choose between Blackmagic and AJA Video Systems, the two most popular options for professional video I/O.

Oculus Avatars: The Oculus Avatar SDK includes an Unreal package to assist developers in implementing first-person hand presence for the Rift and Touch controllers. The package includes avatar hand and body assets that are viewable by other users in social applications.

Accelerated Automation with Jacketing and Defeaturing (Unreal Studio): Jacketing automatically identifies meshes and polygons that have a high probability of being hidden from view and lets users hide, remove, or move them to another layer; this command is also available through Python so that Unreal Studio users can integrate this step into automated preparation workflows. Defeaturing automatically removes unnecessary detail (e.g. blind holes, protrusions) from mechanical models to reduce polygon count and boost performance.

For a full feature list and additional details, visit unrealengine.com/en-US/blog.