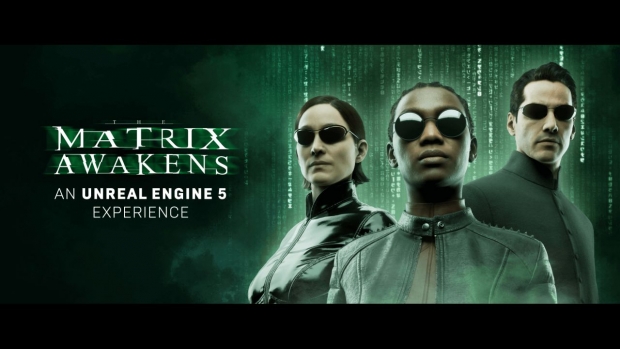 In 1999, when VFX was in its infancy, The Matrix was released, capturing the attention of audiences with its groundbreaking, never-before-seen visual effects. CG assets were synthesized in the world of a computer, including digital humans, digital fire, digital clouds, and digital environments—but it took many hours to generate just a single frame of film using the technology of the day.

Now the industry and the processes have been revolutionized bringing the technology to a point where a modern game engine can produce that same imagery in real-time.

To demonstrate how it’s now possible to create the photorealistic simulated worlds depicted in the original The Matrix films, Epic Games assembled a team of experts to help create The Matrix Awakens: An Unreal Engine 5 Experience, a technical demo that blurs the boundaries between cinematic and games.

John Gaeta, the creative producer of the project, describes how with new technology, the industry is at a pivotal point in the creation of realistic virtual worlds. He said, “Now with Unreal Engine, you can get much closer to the idea of The Matrix than you could do in film.”

“There are only a few films that change the way, as an audience, you view cinema,” noted James McTeigue, co-writer, and co-director on The Matrix Awakens: An Unreal Engine 5 Experience. “The Matrix came at this intersection where people were starting to have this investigation around what's real, what's not real—how much our world will become digital.”

Applicable for everything from film to games, the prospect of building ultra-realistic worlds has significance beyond these mediums, Gaeta described the project as giving creators, “…. a tiny snapshot of what a moment in the metaverse could be like.”

Watch: The Making of The Matrix Awakens | Spotlight | Unreal Engine

Creating a virtual city from scratch

The Matrix Awakens: An Unreal Engine 5 Experience features a large explorable open-world city likened to the complex simulated world of The Matrix. To create the virtual city, the team turned to references on which to base the building designs, picking a range of styles, some of which included complex forms and intricate shapes.

“That’s something teams working on real-time projects might ordinarily shy away from, because it requires the processing of so many polygons,” explained Epic Games art director Jerome Platteaux. “It takes a lot of computer power to generate that much detail everywhere. That's where our Nanite technology for virtual geometry comes into play.” Nanite is Unreal Engine 5's virtualized geometry system. It renders the city environment at an unprecedented level of detail including carved moldings on buildings, chain-link fences, and dense traffic filled with thousands of cars.

Despite the complexity, only a small core team was needed to create the experience thanks to a set of procedural tools including SideFX’s Houdini. Procedural rules define how the world is generated, from the size of the roads and the height of the buildings, all the way down to how much debris is on the sidewalks.

In the original The Matrix, the team maintained the look and feel of the megacity. Gaeta describes, “In the original trilogy, grids and things that are mathematical feeling were subliminally intertwined in a lot of things. So, for Awakens, we wanted to have that feeling again.”

Votch Levi, senior technical artist at Epic Games, explained that the goal was to capture the essence of the original metropolis, so the team did not set out to create the appearance of a naturally grown organic city.

Watch: From the Matrix to the Metaverse | Spotlight | Unreal Engine

A wild ride with Trinity and Neo

Using the original Matrix trilogy as a reference for the camera work in the cinematic part of the demo and focusing on the high-speed pursuit in Matrix Reloaded the team created an exciting car chase.

“It was very important for us to keep the same language of camera that we saw in the original Matrix,” noted Platteaux.

The team even made sure the camera had the same amount of shake inside the car.

“The mindset was all about, let's shoot this thing like Lana [Wachowski] would have shot it,” added Colin Benoit, lead camera artist at Epic Games. “But going faster.” The demo introduces creators to the possibilities of creating a cinematic sequence through high-fidelity simulation, opening the door to a completely new way of storytelling. Many action scenes in the demo originated with crew members driving cars around the city to capture exciting shots.

“Maybe, there's better acceleration here,” said Platteaux. “Or maybe, the car can drift around there. When you're happy with the action, you can lock that action, and then refine and place your camera around the stunt.”

For a camera artist, the workflow allows new flexibility. Benoit described, “It was easy for me to put a camera on something and get all the beautiful final pictures in camera. If I put a camera on Keanu and he's talking in a car driving 70 miles an hour, I can move the camera around. I can change focus just like a live-action DP would have. It's pretty mind-blowing.”

The worlds of film and games collide

The Matrix Awakens: An Unreal Engine 5 Experience merges art forms in new ways. Viewers become players as the demo morphs from cinematic to a fast-paced interactive experience of car chases and third-person shooter action. Stepping between the two mediums is seamless.

“The first-time people are playing it, they realize that they have control and it's interactive,” said Benoit.  “But it looks exactly like the thing they were just watching before. That's the ‘aha!’ moment. People are like, ‘wait, wait, wait—I can play this? This is crazy.’” The project brings to the forefront that worlds of this size and visual quality are no longer the preserve of massive studios and multi-million-dollar budgets. Procedural systems that take the time-consuming grunt work out of building complex environments, the power to process billions of polygons and render them out seamlessly, and free tools that reduce character-building from months to minutes mean even small teams can deliver experiences like this.

“With Unreal Engine 5, anybody can sit down and put together a photorealistic environment that they can then use as a backdrop for telling their own stories,” said Levi.

Epic Games CTO Kim Libreri sees this as a game-changer for creators, viewers, and players, saying, “In terms of what it means from an entertainment experience perspective, who knows? The possibilities are infinite.”

Check out and explore the tech demo The Matrix Awakens: An Unreal Engine 5 Experience here.