Entertainment One gears up for the launch of its U.K. licensing program for the company’s hit preschool animated superhero TV show. 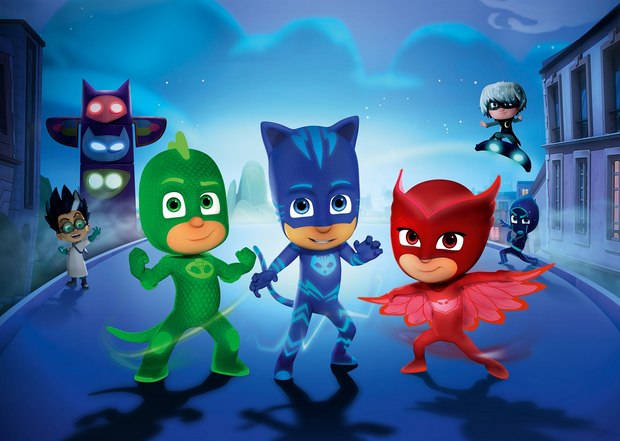 PJ Masks launched on the 24-hour preschool Disney Junior channel in the U.K. during February 2016 and is already proving to be a hit with both girls and boys aged 3-6 years. The show consistently features in the channel’s top 5 rated series and as a result, Disney Junior has increased PJ Masks airtime to multiple prime-slots daily Monday through to Sunday.

Now, to meet the growing consumer demand in the U.K., eOne is currently gearing up to the launch of the market’s PJ Masks licensing program, targeting boys aged 4-6 years. The roll out will be spearheaded by Flair’s Just Play division, which will distribute the brand’s master global toy line from February 2017. The initial range to hit shelves includes plush, vehicles, action figures and dress-up.

The PJ Masks U.K. merchandise offering will then be significantly bolstered in AW17 as publishing and apparel merchandise debuts at mass-market U.K. retail. Leading publisher Hachette has been appointed as master publishing partner for the territory and is on board to produce an extensive line of publishing formats. eOne has also inked a deal with Immediate Media for a standalone official PJ Masks 4-weekly kids’ magazine and additionally Redan is set to introduce PJ Masks content into its popular multi-brand Fun to Learn Favourites and Fun to Learn Friends magazines. Alongside publishing, the first partners signed in the apparel category are Aykroyd TDP, which will see the launch of kids’ nightwear and underwear.

“PJ Masks is quickly establishing a solid and engaged fanbase across the country with viewers being drawn to the show’s heroic characters, action-packed storylines and top-class animation,” comments Katie Rollings, Head of U.K. Licensing at Entertainment One. “We’ve had a tremendous response to the property and we’re now delighted to be welcoming a top-tier line up of partners to the PJ Masks U.K. licensing programme who we’re confident will give young fans the best possible experience of the brand.”

“We have an extensive product line-up that we believe will perfectly emulate the action and adventure that is part of every PJ Masks episode,” said Simon Hedge, Managing Director – GP Flair, speaking on the toy range. “On previewing the collection, our retailers were keen to launch as early possible, hence the early spring release of the collection. To support this we are putting together a marketing strategy, targeting both boys and girls, that will ensure awareness of the toy lines at its height from the moment the toys hit the stores.”

A global digital marketing strategy for PJ Masks is driving fan engagement through a dedicated content-packed website, plus Facebook, Twitter and YouTube channels which are rapidly gaining traction. The licensor also released the brand’s first free app, Moonlight Heroes, globally in June 2016 which has notched up over 2 million downloads since its launch, of which 179k have been downloaded in U.K. Bolstering the brand’s app offering, eOne will launch the first PJ Masks paid app Super City Run in multiple international territories at the end of November.

PJ Masks is already a smash hit in the U.S. where the pajama-sporting preschool super heroes premiered on the Disney Channel and Disney Junior in September 2015 and quickly rose in popularity to become a top 10 show in the US and one of Disney Channel’s top rated shows. The U.S. licensing program boasts over 40 partners and merchandise began rolling-out in North America this autumn including introductory toys from Just Play, publishing products from Simon & Schuster and apparel from Happy Threads. Merchandise is set to roll out across additional international territories from 2017.