Award-winning preschool special based on the picture book set by Oliver Jeffers will air in the U.S. on Sprout Christmas 2016. 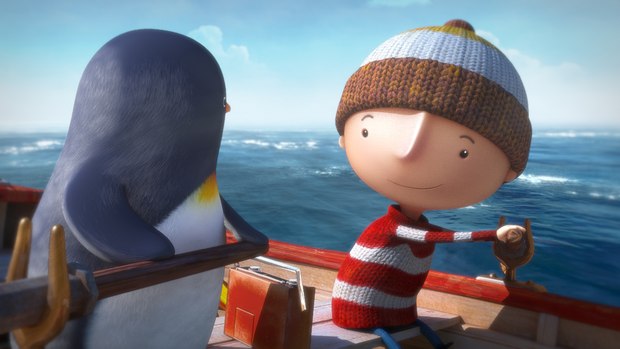 LONDON -- Entertainment One has secured a broadcast deal for its BAFTA award-winning film Lost and Found on Sprout, NBCUniversal Cable Entertainment’s 24-hour U.S. preschool network. The critically acclaimed half-hour animation will be joining the network’s lineup of quality programming this Christmas. It will premiere on December 2nd at 3pm ET and will air throughout the month of December.

Based on the international best-selling children’s book by celebrated author Oliver Jeffers, Lost and Found was produced by multi award-winning production company STUDIO AKA. The film tells the unforgettable story of a little boy who finds a penguin on his doorstep. Although at first he is unsure what to do, the Boy becomes determined to help the Penguin find his way back home... even if that means rowing all the way to the South Pole!

This poignant half-hour animated film is narrated by acclaimed actor Jim Broadbent and features a stunning score by composer Max Richter in a story that celebrates the true meaning of friendship. The film was developed in close collaboration with Oliver Jeffers and beautifully adapts the book’s dreamlike illustrations into a heart-warming CGI animation.

“Sprout is the perfect home for this remarkable film,” comments Monica Candiani, Head of International Sales at Entertainment One Family. “Families in the US adore the books of Oliver Jeffers and we’re delighted that they will have the opportunity to watch this beautifully crafted animated film adaptation when it airs this Christmas.”

Oliver Jeffers is a best-selling author and illustrator in the USA where his books have been met with international acclaim. In addition to Lost and Found which was a popular children’s picture book in the States, two of his more recent picture books, Stuck and The Hueys in the New Sweater have also won rave reviews and gone straight into the New York Times bestseller list.