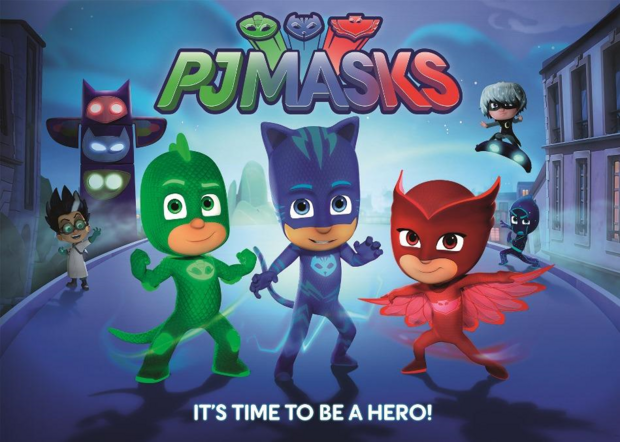 PJ Masks launched on Disney Channel and Disney Junior in the U.S. in September 2015. The new CGI animated series has become one of the channel’s top rated shows and is rapidly establishing a fan-base in the States. Since its launch, to date, it is the channel’s No.2 series based on total viewers and pre-schoolers ages 2-5. Following its strong U.S. debut, PJ Masks debuted on France 5 in December to very strong ratings and is set to roll-out on Disney Junior channels around the world from 2016 including the UK, Italy, Spain and Germany in Q1 2016.

In response to growing consumer demand from families across the U.S., a debut range of PJ Masks toys and playthings from Just Play, based on the super hero themed show, will launch at retailers beginning fall 2016, rolling out to international territories in 2017. Just Play will produce an extensive line of new PJ Masks toys across multiple categories that include action figures, playsets, vehicles and plush in addition to dress-up and role-play.

“We’re delighted to join forces with Just Play to deliver high-quality PJ Masks toys that will bring out the superhero in every child,” said Andrew Carley, Head of Global Licensing, Entertainment One Licensing. “Toys are the backbone of any successful kids licensing program and Just Play has both the expertise and enthusiasm to create a toy line that will fuel the imaginations of young children around the world and build PJ Masks into an enduring children’s brand for generations to come.”

“We’re incredibly excited to be partnering with eOne on PJ Masks as we feel very passionately that the super hero themes and the characters’ special powers have a global appeal that will translate into an amazing toy line.  We look forward to bringing fans everywhere a wide range of toys that will allow them to extend the action-packed adventures of the series well beyond the TV screen,” commented Geoffrey Greenberg, President of Just Play.

In the U.S., the pajama sporting preschool band of superheroes, Catboy, Gekko and Owlette, has won over young audiences and their families with the very first episode, attracting 1.6 million unique viewers across its Disney Channel and Disney Junior premieres. The initial episode of the series also won an average audience share of 29% among 2-5 year olds, slotting as the 24-hour Disney Junior channel’s #1 series in its first two weeks on air.

eOne, the global entertainment company behind preschool sensation C, will build consumer engagement for PJ Masks through a raft marketing activity including a new PJ Masks website, a free app and music videos set to launch in early 2016.

Produced by eOne and Frog Box, in collaboration with the award-winning French animation studio TeamTO, along with Disney Junior and France 5, PJ Masks is based on French author Romuald Racioppo’s popular picture book series Les Pyjamasques. By day, 6-year-olds Connor, Amaya and Greg go to school like kids everywhere. But when they put on their pyjamas and activate their animal amulets, the crime-fighters magically transform into their dynamic superhero alter egos and become the PJ Masks: Catboy, super-fast and agile; Gekko, super strong and able to scale walls; and Owlette, with the power to fly and see great distances. In each episode, the three heroes embark on exciting adventures and work together to solve mysteries and learn valuable lessons along the way.