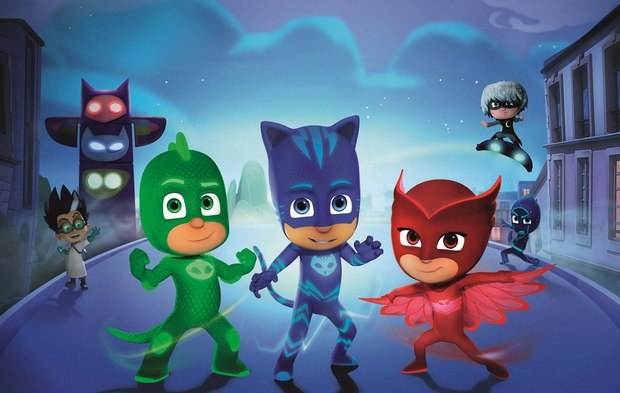 LONDON -- Entertainment One has announced a new broadcast partner and a raft of new licensees signed for its hit preschool superhero TV property PJ Masks, as it prepares to debut the brand’s first toy line in the U.K. beginning February 4th.

Broadcast exposure for PJ Masks will be boosted in the U.K. when the series launches on Sony Pictures Television Networks’ free to air channel Tiny Pop starting February 25th. The show currently airs on Disney Junior in the U.K. where it debuted in February 2016 and consistently ranks as one of the channel’s top performing shows.

Leading into the 2017 toy fair period, the licensor has also confirmed that VTech and LeapFrog is on board for a range of electronic toys covering the VTech platforms Innotab/DigiGo and Leapfrogs platforms LeapPad, Epic and LeapStart while Ravensburger will produce a range of puzzles and games that will launch in July 2017. Further anchoring the U.K. licensing program, Roy Lowe will launch socks from October 2017 and William Lamb will introduce a limited range of bags for back to school later this year with an expanded line of bags and footwear to follow in January 2018. In addition, Dreamtex will introduce children’s bedding from October 2017, Zak is signed for lunchware products and Gemma International will produce a PJ Masks party and greetings range.

“PJ Masks is capturing the imaginations of kids and families across the U.K. and we’re delighted that more children will have the chance to watch the show when it premieres on Tiny Pop,” said Katie Rollings, Head of U.K. Licensing at Entertainment One. “The consumer demand for merchandise is building rapidly and with the highly-anticipated toy launch just around the corner, we’re thrilled to be welcoming a range of new partners that will bring the action-packed, heroic adventures of the PJ Masks trio to life for fans of the show.”

Toys are spearheading the launch of PJ Masks consumer products in the U.K. and will debut at retail from 4th February 2017. The master global toy line will be distributed in the U.K. by Flair’s Just Play division and the initial products hitting shelves next month include plush, vehicles, action figures and dress-up.

Following the toy launch in February, the licensing program will be significantly expanded from July 2017 with products launching in the apparel, publishing, homeware, accessories and back-to-school categories.

PJ Masks launched on the 24-hour preschool Disney Junior channel in the U.K. in February 2016 and is proving to be a big hit with both girls and boys aged 3-6 years. The show consistently features in the channel’s top 5 rated series and a second series is currently in production.

A global digital marketing strategy for PJ Masks is driving fan engagement through a dedicated content-packed website, plus Facebook, Twitter and YouTube channels which are rapidly gaining traction. The licensor also released the brand’s first free app, ‘Moonlight Heroes’, globally in June 2016 which has notched up over 5 million downloads since its launch, of which over 200k have been downloaded in U.K.. Bolstering the brand’s app offering, eOne launched the first PJ Masks paid app ‘Super City Run’ in multiple international territories in December 2016 and the app has already generated 30k downloads.