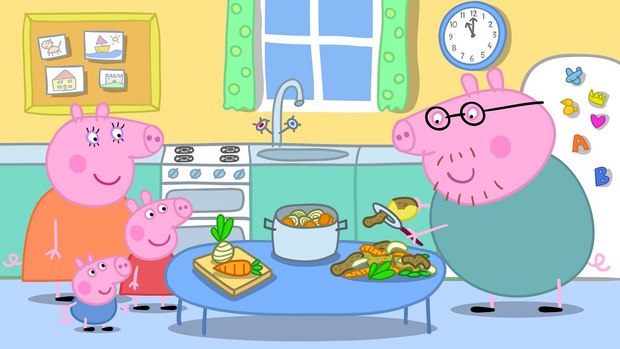 LONDON -- Entertainment One has announced new broadcast and licensing developments in France for its preschool series Peppa Pig. Peppa Pig consumer products first launched in France in summer 2014, when toys debuted at retail. After a very strong start eOne is now readying the brand’s entrance into the mass market retail sector, which will see licensed merchandise available in nationwide retail chains including Carrefour and all mass market food chains in addition to Toys’R’Us, La Grande Recre and Joué Club. The licensing program is managed by eOne’s licensing agent in the region, France TV Distribution, and currently boasts over 35 licensees. Master toy partner Giochi Preziosi leads the toy category, supported by Diset for board games and Taldec for computer games. Publishing partner Hachette Jeunesse introduced a range of story, activity and coloring books in addition to stationery from early 2015. Cijep has signed for plush, accessories and furniture and partners are also signed across magazine, apparel and accessories, homewares, partyware, toiletries, confectionary and food. These licensees will be rolling out with full listings in 2016.

The TV show has a strong broadcast presence on France 4 and France 5 where multiple episodes are aired back to back daily.

With awareness of Peppa Pig reaching an all-time high, eOne, together with France TV Distribution, will be working with long standing UK stage show partner, Fiery Angel, to bring its internationally popular live show production Peppa Pig’s Big Splash to audiences in France. Decibels Productions, a subsidiary of Warner Music France, will handle local production. A nationwide tour is scheduled to kick off from end of 2016 with a premier planned for Paris, and the show will be rolled out to further cities in 2017.

Ami Dieckman, Head of International Licensing at eOne commented, “Initial sales of Peppa licensed merchandise have surpassed the expectations of retailers in France and with the added exposure of France 4 and France 5’s daily broadcasts and the upcoming live show, it’s clear that the time is right to bring the brand to the mass market.”