English-Language Voice Cast Announced for ‘Moomins on the Riviera’ 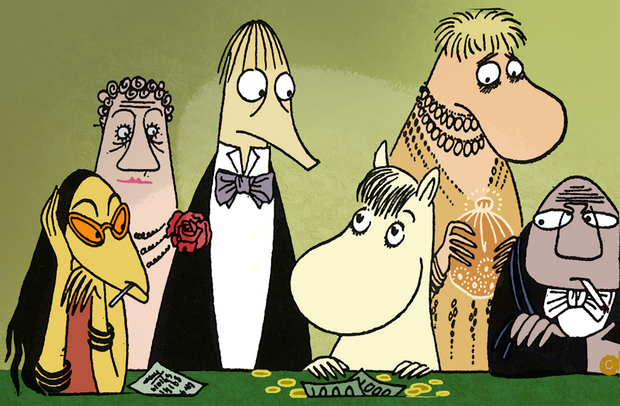 Helsinki -- The English-language voice cast has been announced for hand-drawn feature Moomins on the Riviera. Directed by Xavier Picard and produced by Hanna Hemilä, Moomins on the Riviera is based on Tove and Lars Jansson’s beloved “Moomin” comic strip and books. The film is a co-production between Finland’s Handle Productions and France’s Pictak Cie.

In the film, the Moomins, Snorkmaiden and Little My, in search of adventures of their own, set sail for the Riviera, where, after a journey fraught with menacing storms and desert island dangers, Snorkmaiden is dazzled by the attentions of a playboy and Moomin learns that jealousy’s sting is the most painful of all. When Moominpappa befriends an aristocrat and adopts the name “de Moomin,” an exasperated Moominmamma retires to the relative calm of their trusty old boat, to wait for her family to come to their senses. For the very first time, the unity of the Moomins is threatened. Moomins on the Riviera is created in a unique hand-drawn animation technique inspired by the original comic strips. The animators are using a reduced color scale for the backgrounds to carefully adapt the strips for a modern audience while maintaining the original feel of the black-and-white comic strips.

A film for all audiences, the Moomins embrace cross-cultural understanding and tolerance. Addressing universal themes such as finding joy in the small things in life, family, and optimism, Moomins on the Riviera is sure to resonate with viewers around the world.

The film has already been sold to Finland, Sweden, Norway, Denmark, Iceland, France, Switzerland and Japan.

Moomins on the Riviera arrives in theaters beginning October 2014.