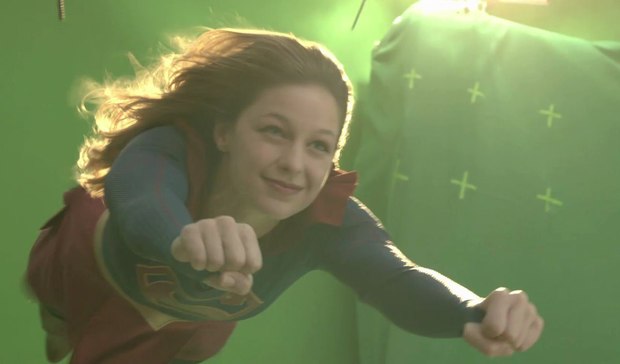 VFX Breakdown of the effects created for ‘Supergirl.’

From gigantic telepathic gorillas, intricate spaceships and electrifying super suits to subtle image enhancements, the artists at Encore create a range of visual effects for some of the hottest shows on television, including Black Lightning, SEAL Team, The Flash, Supergirl and Legends of Tomorrow.

Almost as impressive as the visual feats achieved each week, such as orchestrating an epic Beebo showdown, crafting photoreal digital doubles or transporting audiences to the Middle East, is the volume of work. In the past year alone, Encore, a Deluxe company, delivered more than 15,000 VFX shots, a number that continues to grow. To keep up with the demand, the studio has significantly expanded in terms of creative talent and technological resources. “We’ve grown tenfold in the past five years,” said Andranik Taranyan, who is both a DFX Supervisor and one of the architects of Encore’s VFX pipeline. “With this expansion, we’ve needed more space for artists and more power. At the moment, we own all the machines in our farm, with enough juice to power several city blocks no less. We’re spread out, but we’re looking for new ways to facilitate our growth.”

Encore currently shares a 1,200-node farm across its facilities in Burbank, Vancouver and Atlanta. The bulk of the machines are hosted in a data center with small portions localized to other facilities. To seamlessly manage resources, Encore relies on Deadline from AWS Thinkbox. Deadline has long been the render management backbone of Encore; the studio recently deployed Deadline 10, which simplifies access to cloud resources, among other capabilities, and has been adding cloud-based resources to its workflow.

Tarayan explained, “We’re always in production, which makes it challenging to implement big workflow shifts. The upgrade to Deadline 10 was in preparation of hooking into cloud resources. We’ve already begun building out local GPU-based resources and if we can get to a point where we could just spin up a GPU farm on the cloud and set up renders on the same day, that will be awesome, especially when we are in a crunch.” With the elasticity and flexibility of Amazon EC2 and EC2 Spot instances, studios like Encore can satisfy even the most ambitious compute demands.

“Deadline’s native support for cloud integration greatly simplifies the process for bursting and managing cloud resources as needed, all from a single familiar management interface,” noted Mike Knox, Director of Production Technology and Pipeline for Deluxe. “The ability to leverage regionally-available cloud resources when and where we need opens the door to new options that weren’t previously available. Coupled with Deadline’s out-of-the-box versatility and extensibility, the approach taken for tying into cloud infrastructure seamlessly breaks through many of the hurdles faced with adding auto-scaled instances to existing farms in a controlled and security-conscious fashion.”

Encore Technical Director Jeremy Jozwick has been working with Deadline since he joined the studio more than seven years ago; he added, “Deadline has been our go-to render manager for a long time, and over the last three years, we’ve been integrating it with more tools and applications. Previously we’d just submit 3ds Max or Nuke jobs and get a render. Now, we’re also using the Draft feature in Deadline with Shotgun, and other apps like Houdini. Deadline has grown quite a bit in terms of capabilities; it’s a very flexible tool.”

In addition to its dedicated farm, Encore also taps around 300 artist workstations for rendering during non-business hours. Through Deadline, all of Encore’s compute resources are managed in a single repository and grouped for different departments based on need.

Beyond compute management, Encore Director of Pipeline Chris Reid is exploring new use cases for Deadline. “Deadline gives us a direct connection to every workstation and render node in our pipeline. It also lets us categorize them into groups which can be very useful when executing specific utility scripts across the network. From Deadline Monitor, we can run scripts and get immediate status of those processes. We have it running everything from utilities for generating metadata files for 3ds Max or other binary files, to copying/moving or backup of data,” he concluded.