10-year company veteran gets new title and new responsibilities, now tasked with management of studio’s expanding production slate; will also support the creative teams while promoting connections between global partners and the LA and Vancouver offices. 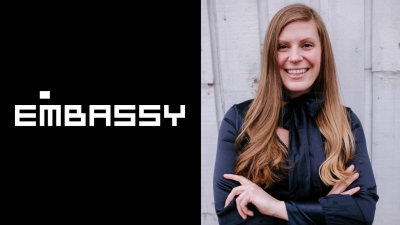 Vancouver-based creative studio The Embassy has promoted Danielle Kinsey to the role of Head of Production. She began her tenure with the studio in 2012 as project manager, and was eventually tapped to produce VFX on The Hunger Games: Mockingjay Part 1 and 2.

Over the past decade, Kinsey has grown with the studio and witnessed its expanding partnerships. During this period, she participated in an extensive list of projects working across film, television, and advertising. Her credits include Warrior Nun for Netflix and Captain America: The Winter Soldier as well as commercials for Flonase, Cat’s Pride, and Pennzoil.

In her new role, Kinsey’s primary focus will involve collaborating with teams, managing the facility’s production work, and supporting the production staff. She will also provide oversight and support to the studios’ remote working culture, promoting its growth and facilitating connections with global partners by the Vancouver and Los Angeles offices.

“I attribute my career progression to my personal drive,” shared Kinsey. “I always strive to learn and stretch myself because great things never come from comfort zones. But, importantly, the team at The Embassy has encouraged me through it all - I've always been treated as an equal by the partners here, and know I have the leadership team’s support. Our nimble approach works best for me and has allowed us to continually innovate beyond the traditional VFX studio model. We pride ourselves on being not only visual effects artists and supervisors, but also storytellers that concept, direct, and collaborate to create award-winning visual effects from the start of the process all the way to the end.”

Adding, “We’ve essentially doubled in size in the past year, welcoming new artists, lead positions, technology roles, a people and culture manager, and are continuing to recruit. I’m excited to help build the company we want with more resources than ever before as we continue to evolve, support a balanced lifestyle, make cool art, and sign off at the end of the day proud of the work. We’re celebrating our 20th anniversary this year and it feels like this is just the beginning.”

“I’m very excited to promote Danielle to Head of Production,” commented The Embassy EP and President Winston Helgason. “In her new role, we will collaborate to support The Embassy’s continued growth and success as a true creative production partner for our clients. With 20 years of experience working across features, streaming, and commercials, we know that strong production is essential. Danielle will now help to develop our production and other departments’ teams to service the expanding needs of our clients while ensuring the high quality and innovation The Embassy is known for.”