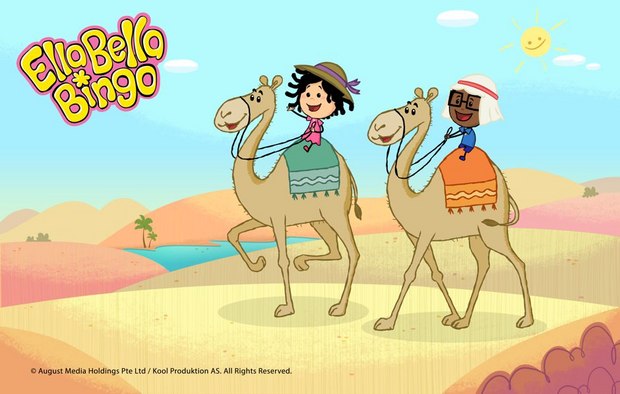 Co-produced by August Media Holdings and Norway’s Kool Produktion AS, Ella Bella Bingo is targeted at preschool children and follows the adventures of happy-go- lucky Ella and her friends. Directed by the BAFTA winner and Emmy-nominated director Ginger Gibbons, and scripted by the acclaimed writer Sam Barlow, each seven-minute episode is about how Ella uses her boundless creativity, infectious enthusiasm and a never-give-up attitude to solve everyday problems in spectacularly innovative ways.

“After its huge success in the Scandinavian countries, we’re excited about Ella Bella Bingo’s journey to the Middle East. What is truly wonderful about this series is that children all over the world can relate to it, geographical and cultural barriers notwithstanding,” said Jyotirmoy Saha, CEO and Founder of August Media Holdings. “I am sure that Ella will always continue to delight and inspire children wherever she goes. We look forward to extending this relationship with JCC over the next seasons too.”

“Ella Bella Bingo has a talented creative and production team scattered in different parts of the world - Norway, Singapore, England and India,” said Frank Mosvold, the Creator and Executive Producer of Ella Bella Bingo. “Now I am excited to see Ella travelling to yet another exciting destination - the Middle East. Together with August Media Holdings, I wish Ella Bella Bingo bon voyage.”

Following the huge reception of its first season, Ella Bella Bingo already has published books, iOS apps and DVDs in the market.

The second season of the show has just finished production and is expected to hit TV screens in Scandinavia and the ASEAN region during the first quarter of 2014. Season Three is already under production and will progressively be ready starting the summer of 2014.