Ella and Louis’ Famed ‘Cheek to Cheek’ Duet Gets Animated 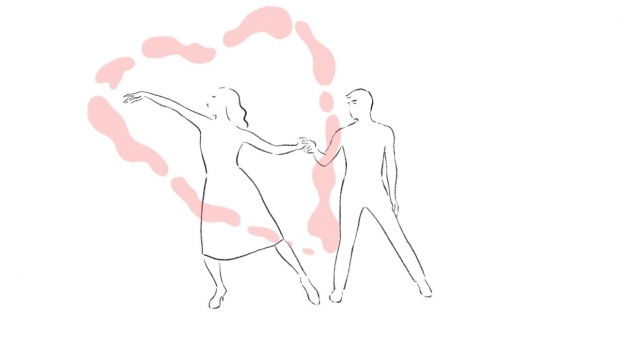 In celebration of the legendary Ella Fitzgerald’s 104th birthday, one of her most beloved and captivating duets with Louis Armstrong, “Cheek to Cheek,” has gotten even more animated with a whimsical new 2D music video.

Directed by Brooklyn-based artist Wendy Cong Zhao, the short, inspired by vintage pencil drawings, portrays two lovers who meet, separate, and come together again through a series of imaginative, animated dance scenes. “I captured the dancers on video in a traditional studio shoot, then rotoscoped their movements frame by frame to create the animated line art,” said Cong Zhao. “Many drawings were added in that process to complement and transform the dance moves, such as objects and figures freely transitioning and morphing to the flow of the music. The black and white lines, with a few pops of color, reflect a certain sophistication and passion. The music video is a celebration of the romance depicted in this iconic love song.”

Watch, and listen, to the magic:

For Cong Zhao, pre-production took one week, shooting the dancers took one morning, and animation production took around one month. Her production toolset included Adobe Photoshop and After Effects. “There was a large amount of drawing to be done in a short time, but fortunately the art style is clean and minimal, and I was able to maintain consistent quality in the drawings,” she notes.

“My main animation technique was rotoscope, combined with morphs and transitions,” she continues. “I first developed a storyboard and filmed the two dancers accordingly, then rotoscoped their movements. The talented dancers did their own choreography. Many drawings were added during that process, inspired by the dance moves, to create a little more magic and romance in the animation – having the lines break apart, transform, etc.” Cong Zhao’s biggest challenge was the tight schedule. “Luckily, I was able to make all the drawings without compromising quality – the dancing was so inspiring, so I enjoyed the drawing process immensely,” she shares. “Having a well-planned storyboard and shot list was crucial, to make sure that I had enough footage, and the correct footage, as the basis for the animation.”

Though this was the first time Cong Zhao had used this process, she was quite pleased with the results. “It worked quite well,” she shares. “The song is so timeless, I wanted to create something elegant that hopefully would not look dated as time passes. So, I decided on a minimal style that can describe the most amount of movement and dimensionality with simplest lines.”

Choosing a more abstract visual, rather than a specific narrative story, helps ensure the singers are the biggest stars, and the driving force, of the short, which Cong Zhao admits, is “as it should be.” “There is also a short segment in the video that is an homage to Fred Astaire and Ginger Rogers’ choreography from the movie Top Hat, as they were the first couple to dance to the song ‘Cheek to Cheek,’” she adds. “Overall, the music video is a celebration of jazz, dance, and romance.” “Cheek to Cheek” was released in 1956 on Ella and Louis’ first album together, Ella and Louis on Verve Records. The jazz legends first recorded together in 1946 when Ella was a 29-year-old rising star of the contemporary jazz scene and Louis, at 45, was jazz’s elder statesman. While the two would meet up every few years to cut some tracks, it took a decade for them to do a full album together.

All of Ella and Louis’ classic duets, including “Cheek To Cheek,” are available on the 4CD/digital set, Cheek To Cheek: The Complete Duet Recordings, which includes remastered versions of Ella and Louis, Ella and Louis Again and Porgy and Bess – along with all of their Decca singles, live recordings from Jazz at the Hollywood Bowl, recorded as a warmup for Ella and Louis, plus several alternates and false starts from the Decca and Verve eras, illuminating their craft and good humor. You can stream or purchase it here.