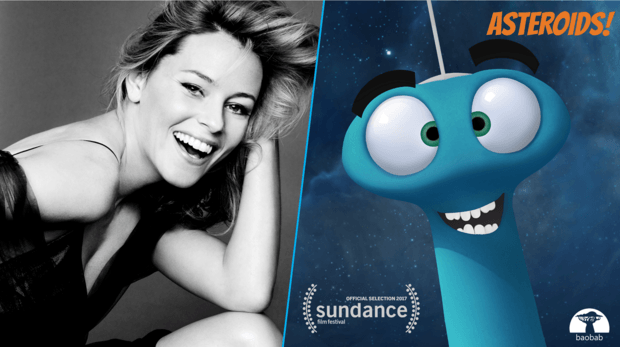 REDWOOD CITY, CA -- Seamlessly moving across the mediums of television, film and animation, Emmy-nominated actor and director Elizabeth Banks is now expanding her voice-acting career into the cutting-edge realm of virtual reality.

The full ASTEROIDS! VR animation will be unveiled at the Sundance Film Festival in January, and has been chosen as an official selection.  In ASTEROIDS! you take on the role of a helper-bot alongside a pair of quirky aliens, Mac and Cheez, in a completely immersive story filled with humor, excitement and compassion. Joined by their other robot sidekick, Peas, you wait for a chance to prove your worth on a dangerous mission in deep outer space. The chance finally comes when the spaceship is endangered by teeth-gnashing space-bugs and careening asteroids.  With the others up to their alien eyeballs in trouble, it’s your job to save the day!

ASTEROIDS! will be Baobab’s second VR animation and is the highly anticipated follow-up to INVASION!, the studio’s first VR animation and winner of top awards, from Tribeca to Cannes. Additionally, a feature-length film based on the INVASION! characters and story is slated to be developed by Hollywood producing team Roth/Kirschenbaum, known for their creative twists to classic family stories including Alice in Wonderland and Maleficent.

“Elizabeth’s voice brings the heart-warming and blissfully innocent character of Cheez fully alive in ASTEROIDS! as viewers don a VR headset and become part of the completely engrossing animated story,” explains Maureen Fan, CEO and co-founder, Baobab Studios. “This story employs a secret, decodable and very fun alien language that she has fully and enthusiastically embraced in the voice of Cheez.”

Directed by Baobab co-founder and chief creative officer Eric Darnell, ASTEROIDS!, like INVASION! has a trademark and highly popular style, pulling the viewer further into the story and making them feel both physically and emotionally part of the storyline itself. Darnell is best known for his director and screenwriter talents on all four films in the DreamWorks’ Madagascar franchise, and in top roles for The Penguins of Madagascar and Antz.