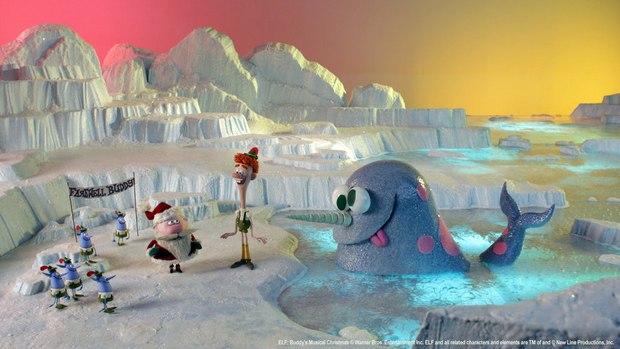 “Elf: Buddy’s Musical Christmas” combines the humor and spirit of both the beloved 2003 holiday film, which drew glowing reviews and earned $173 million at the domestic box office, and the hit Broadway production. The special is an all-new retelling of Buddy’s delightfully absurd yet heartwarming story and blends the look and feel of the stop-motion animated Christmas specials of the past with the sharp sensibility of the modern-day classic holiday film.

Santa narrates the story of Buddy’s travels to New York City to meet the father he never knew he had. Along the way his unrelenting cheer transforms the lives of everyone he meets and opens his father’s eyes to the magic of Christmas.

There are nine songs in the special, including “Happy All the Time,” “A Christmas Song” and “Nobody Cares About Santa Claus.”

Score by Matthew Sklar and Christopher Guardino, with original songs from Elf: The Musical (music by Matthew Sklar and lyrics by Chad Beguelin). Based on the New Line Cinema theatrical motion picture Elf, written by David Berenbaum, and the Broadway musical Elf, originally produced by Warner Bros. Theatre Ventures in association with Unique Features.