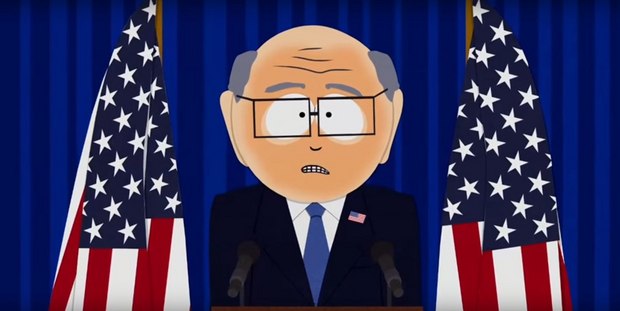 Tonight’s episode of South Park is sure to be fascinating for U.S. election watchers. The long-running series has spun some of its most memorable story arcs out of elections -- including the one held in 2004, which gave us “Douche and Turd,” and in 2008, when the show featured Barack Obama and John McCain teaming up to steal the Hope Diamond.

The South Park team writes and produces each episode in six days, which often allows them to create episodes featuring major news events the same week they occur. In 2008, the South Park team famously delivered “About Last Night...,” which incorporated excerpts from Obama’s victory speech just one day after it happened.

This time around, South Park creators Matt Stone and Trey Parker were caught off guard -- as was much of the rest of the country -- by last night’s results. According to a report by Esquire, the original promo for tonight’s episode, originally titled “The Very First Gentleman,” appeared to imply a decisive win for Hillary Clinton. In the promo released on Monday, which has since been taken down from the Comedy Central YouTube channel, PC Principal promotes an upcoming school visit from Bill Clinton in an effort to combat “male locker room mentality.”

That clip was quickly replaced by a new one that appears to match the events of last night’s real-life election upset. The retitled episode is now called “Oh, Jeez,” and in the new promo clip, unveiled earlier today, a dazed Randy Marsh intones, “Well. I don’t know about you guys, but I sure am excited. America’s going to be great again.” His daughter Shelly screeches back, “this country’s gonna suck for four years!” Then Randy delivers the kicker: “Oh, come on, Shelly. We’ve learned that women can be anything. Except for president.” Ouch.

Learn more about how the South Park creative team delivers each episode in the 2011 Comedy Central documentary, 6 Days To Air: The Making of South Park: