The deadline for applications to the EFA Master Class 2014, ’High Value for Your Budget with Marc Weigert,’ is April 30. 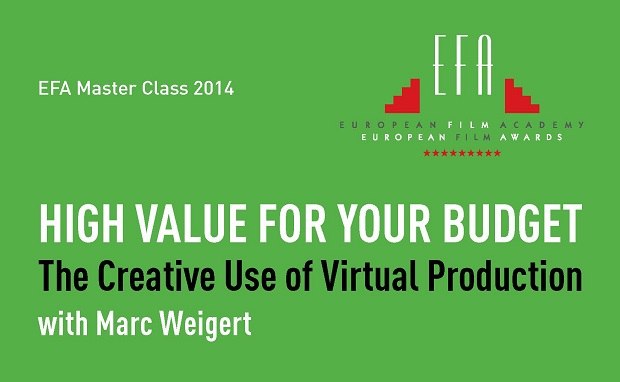 Virtual production allows filmmakers to interact in real time with their virtual film world, blurring not only the boundaries between real and virtual world, but also within the production pipeline between pre-production, production and post-production. How has this influenced the production workflows and how can it be put to use to the best creative effect and production value? Those are only two of the questions addressed by the EFA Master Class 2014 HIGH VALUE FOR YOUR BUDGET with Marc Weigert.

Marc Weigert is an internationally renowned producer, visual effects supervisor and 2nd unit director. His collaboration with Roland Emmerich has included films like White House Down, Anonymous, 2012 and Independence Day. For the latter, Marc Weigert created “Digital Assistant for Visual Effects,” a project management software program to manage, schedule and track the shooting of thousands of VFX elements, which was subsequently licensed to several major studios and used for feature films like Stuart Little, Alien: Resurrection, Godzilla and X-Men. He also served as producer and VFX supervisor for the 3-part TV miniseries The Triangle, winning an Emmy Award for outstanding visual effects, and as VFX Supervisor on a sequence of Martin Scorsese’s Hugo Cabret.

The workshop will be offered in a short-term training format mixing group sessions, screenings, case studies and lectures, but with a focus on hands-on exercises, allowing participants to gain a profound knowledge of all stages of virtual production from world-building and pre-visualization to capture and finishing.

Supported by the MEDIA Programme of the EU and Medienboard Berlin-Brandenburg, the EFA Master Class will take place at Studio Babelsberg in Potsdam, located on the outskirts of Berlin. Founded in 1912, Studio Babelsberg is the oldest large-scale studio complex in the world and one of Europe’s leading service providers for major motion pictures, independent films and TV productions.

EFA Master Class 2014
HIGH VALUE FOR YOUR BUDGET
The Creative Use of Virtual Production with Marc Weigert
June 2-8, 2014, at Studio Babelsberg, Germany

The EFA Master Class 2014 is designed as a multidisciplinary workshop for 20 creative European film professionals – directors, producers, cinematographers and post-production supervisors and anyone working in special/visual effects departments.

All participants must be European* professionals and should have a relevant track record in their respective departments.

Working language is English. Participation fee: EUR 500 covering participation and meals. Transport and accommodation are not included. A limited amount of scholarships is available.

* as a MEDIA-supported training initiative, the Master Class is open to applicants from EU member states as well as Iceland, Liechtenstein, Norway and Switzerland.