NEW YORK -- Looking to showcase their full palette of talent and creative services, NYC-based studio Edit 1, perhaps best known for their work in test commercials and pre-visualization, has put its creative imprimatur on the new music video “Bayonet” from “electropop songstress” BECA.

For Edit 1 President Michael Zimbard, the overarching goal of the project was to create something that was outside the bounds of typical day-to-day projects. He wanted to invigorate the staff by diving head first into a passion project that held no creative boundaries.

“This video shows the full range of creative capabilities we possess – motion capture, pre-vis, live action production, editorial, 3D animation, motion graphic design, compositing -- and more importantly how we can integrate those services for clients to tell a powerful story,” Zimbard says. “It was an incredible experience that allowed us to grow individually as artists and as a company.”

Making her directorial debut, Schack began the process by working with Jaffin on the basic concepts for the video, which features several dazzling performance settings and visual effects.

Chief among them is the striking image of BECA, dressed in a tight-fitting black leotard and lit only by a powerful light emanating from a small portal behind her as animated streaks of light and dust swirl around her. That image stands in contrast to another setting featuring a bright white environment in which syncopated black lines move around BECA creating a surreal kaleidoscope effect. 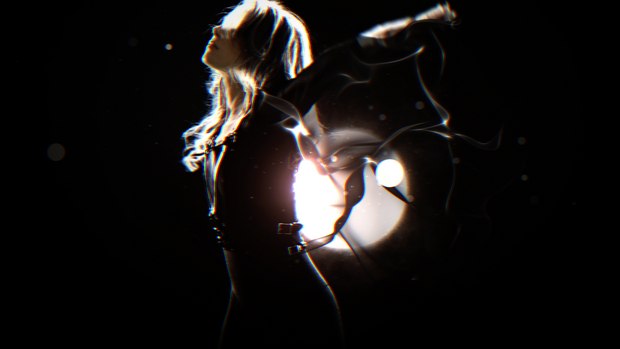 “From a design perspective I wanted to create a distinct look for each setup, but do it in a way where everything felt cohesive to the overall video,” says Jaffin.

In the end, the video required her compositing and design magic on nearly 300 shots. As Edit 1 is no stranger to conceptualizing from the ground up on their pre-vis work, this process began with style frames from Jaffin and a full length motion capture cinematic of BECA prior to shooting.

“We were able to use a lot of the tools and techniques we use for our test commercial projects and bring them to ‘Bayonet,’” Schack explains. “We only had one day to shoot so we needed to be organized and come to the set knowing exactly what shots we needed.”

Adding to the flexibility was the decision to shoot with the RED camera, which offered Jaffin, whose primary tools were Adobe After Effects and Maxon’s Cinema 4D, flexibility to manipulate the live action footage in post and create something straight-forward and clean, yet would hold up to repeated viewing thanks to the constantly moving effects and animation.

“Working with the motion capture pre-vis prior to the shoot gave Zoe and I the chance to experiment and be limitless in our creative thinking,” Jaffin adds. “It also allowed us to go into production knowing exactly what we needed to pull off the concepts.”