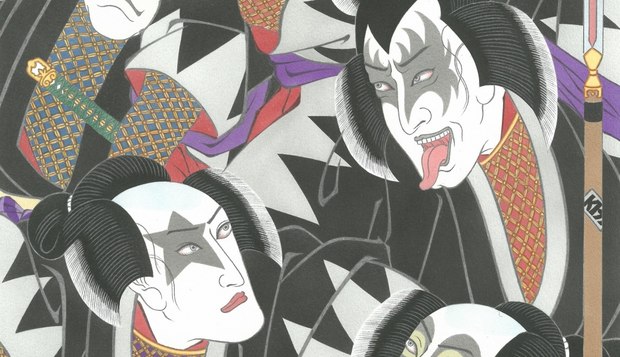 Hollywood, CA -- Legendary superstar rock band KISS will welcome the current # 1 Pop Sensation in Japan, Momoiro Clover Z (MCZ,) a singing group comprised of five young girl singers, to Los Angeles during the week of June 29th, concurrent with the 2015 Anime Expo. As part of MCZ’s Anime Expo activities, the group will perform live during a special concert at the Microsoft (formerly Nokia) Theatre on July 2, with KISS co-founders Gene Simmons and Paul Stanley introducing the group. To be held at the LA Convention Center, the Anime Expo is the largest and most popular convention in North America for fans of the anime and manga artforms, and of Japanese pop culture. Over 100,000 people are expected to attend.

Tickets for this special Concert are available now and only to Badge Holders for attendance to the Anime Expo. Tickets can be purchased at www.anime-expo.org/momoiro-clover-z-ticket-sales-opening-up/ under “Latest Updates.”

In addition, KISS will receive the prestigious 2015 “Special Commissioner’s Award” from Japan’s International Short Shorts Asian Film Festival, one of Asia’s largest and most popular international short film festivals. KISS is receiving this award for the music video they produced in 2014, entitled “Samurai Son,” in which they appear together with MCZ. The award will be presented to Gene Simmons and Paul Stanley on July 2nd at the Nokia Theatre, prior to the start of the MCZ concert that evening.

This “EAST MEETS WEST” cross-promotional campaign is the direct result of KISS’ decades-long affection for Japan and the Japanese culture, along with an unprecedented recent collaboration between KISS and MCZ. In early 2015, MCZ’s release of the Paul Stanley written song "Yume no Ukiyo Ni Saitemina,” (“Samurai Son,”) along with MCZ’s cover of the KISS classic “Rock N’ Roll All Night,” were both included on MCZ’s # 1 EP in Japan. This # 1 EP concurrently marked KISS’ first # 1 record in the band’s 40-year history. The # 1 EP was listed on Japan’s Oricon Chart and Japan’s Amazon Pop Chart. MCZ appears on King Records.

Between February 23 and March 3, 2015, KISS performed to over 1.3 million fans during the band’s five-date tour of Japan (at venues in Nagoya, Osaka, Hiroshima and Sendai.) On March 3rd, KISS performed at the Tokyo Dome to over 30,000 fans. To mark the end of that show, KISS welcomed MCZ on-stage to perform two encores: MCZ performed their smash hits “Yume no Ukiyo Ni Saitemina” and “Rock N’ Roll All Night.” The Video of this Performance will make its World Premiere during the MCZ Concert on July 2 at Nokia Theatre.

During their performance at the Nokia Theater on July 2, MCZ will also perform songs from the upcoming feature films Dragon Ball Z: Ressurection F, produced by FUNimation, coming to U.S. theaters in August, 2015, and Sailor Moon, which will be released in the U.S. later in 2015.

From its very start in the 1970s, KISS paid tribute to the Japanese influence of Kabuki as evidenced by the famous makeup worn by the four members of the band: Starchild, Demon, Catman and Spaceman. KISS has adopted Japanese iconography into its DNA, and has now become Uykiyo-e, a 400-year old art form whose master woodcarvers total only nine living artists! Ukiyo-e, the world renowned Japanese traditional woodblock printing culture, is struggling to survive in the modern world. Through KISS’ involvement, the “UKIYO-E PROJECT” has created brand new Ukiyo-e artwork prints inspired by the four KISS characters. The hopes of this Project are to resurrect this amazing art form and to help pass these techniques to the next generation. So far, there have been two KISS Ukiyo-e designs released. KISS and MCZ collaborative Ukiyo-e artworks will be revealed at the Anime Expo.

KISS and Momoiro Clover Z postage stamps, recently issued through the Japanese Postal service, will also be on display backstage prior to the MCZ Concert on July 2nd.