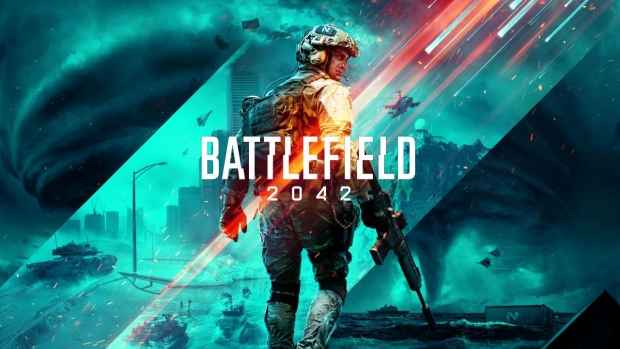 Electronic Arts has released an exciting new reveal trailer for Battlefield 2042, the next game in its hugely successful Battlefield series developed by DICE and distributed by EA. Available now for pre-order, with a scheduled October 22 launch on retail and digital storefronts, Battlefield 2042 promises a ground-breaking first-person shooter experience based on cutting-edge technology that will “revolutionize the modern multiplayer sandbox.”

The trailer was created in-engine (Frostbite) by the Electronic Arts’ Marcom Cinematics team, the same diverse, multi-disciplinary group that created the world’s most viewed official reveal trailer for the WWI-themed Battlefield 1, with over 67 million YouTube views.

Take a seat, hold onto your night-vision goggles, and get ready to move out!

“The reveal trailer for the new Battlefield is a front row seat to thriving in chaos,” says Randy Evans, creative director at EA Marcom Cinematics, who scripted and directed the trailer. “It evokes a roller coaster of emotions in this new Battlefield sandbox that’s still human at its core, and a world worth fighting for. The viewer will yell in fear, laugh out loud, pause in wonder, and scream for joy. It’s a hard hitting, jaw-dropping ride, and well-paced to keep viewers of all types engaged to the end.”

Evans wanted to create a new type of trailer that audiences hadn’t seen before, a short film that is “in the 4-6-minute length range that holds the interest and pacing of the more traditional 1-2-minute-long trailers.” Noting this meant balancing the pacing to ensure every sequence built to a larger payoff, he explains, “Each section of the trailer becomes bigger than the one before. I feel like we have achieved just that. With the content that we had to show off, it felt like the natural place to try this approach. Fans are hungry for more but there is a certain level of care that is required so that it doesn’t turn into something too long and boring while at the same time must not overwhelm the viewer. This was definitely a challenge that I feel we overcame in the final trailer.”

According to Rikard Hörnedal, cinematic artist and generalist, EA Marcom Cinematics, “The coolest thing personally was seeing that rendezook scene get into the engine, and realizing and reminding myself at multiple instances, ‘Oh shit, we are actually featuring the rendezook in a reveal trailer.’ As a longtime Battlefield fan, that made me extremely happy.”

“Together with Gen5, a new version of Frostbite and our constant motivation of improving, we set out to make this trailer the most visually appealing one we’d ever done,” he continues. “This came with a lot of unique challenges but very welcomed ones, like working with Gen5 tech for the first time, and forcing ourselves to compose, light, and produce all of our shots with the very best visual quality in mind. Being able to achieve this for a five-minute long trailer has given the team a lot of confidence for future projects. We are more excited than ever to be working with Gen5 technology.”

Battlefield 2042 is now available for pre-order and set to launch on retail and digital storefronts on October 22 on Xbox One, PlayStation 4 and PC, and on Xbox Series X and S and PlayStation 5.