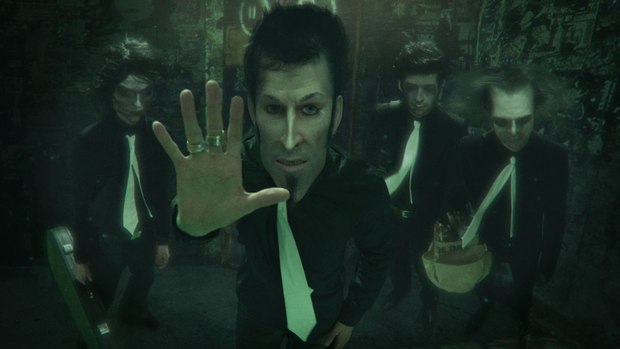 Producer Nicolas Schmerkin, in a Facebook post a few hours ago, has confirmed that Dutch director, musician and author Rosto has passed away at age 50. Sources shared with AWN that he had been undergoing chemotherapy for lung cancer since mid-last year, and had shared with friends this past December that his treatment had not been successful.

Rosto was a true mixed-media artist, spreading his prolific creative energy across graphic novels, animated film and music. Known for his stark, almost demonic style of CG visualization that mixed live-action with often grotesque and violent characters, Rosto directed a series of award-winning animated projects, including (the rise and fall of the legendary) Anglobilly Feverson (2002), Jona/Tomberry (2006) The Monster of Nix (2011) and Thee Wreckers: Lonely Bones. His creative inspiration began with a series of rock 'n' roll songs he wrote starting in 1995 with his band, The Wreckers. The group disbanded, but was reincarnated as Thee Wreckers, and their songs were the basis for Rosto’s serial graphic novel, Mind My Gap, which he started publishing online in 1998. 26 episodes were released sporadically through 2014.

In January 2018, Rosto was honored by the Clermont-Ferrand International Short Film Festival, where he premiered Reruns, alongside a special program featuring his entire Thee Wreckers Tetralogy as well as a documentary about the films and music.

In discussing Reruns, Rosto remarked, “The film plays with the idea that we always try to make sense of our dreams and memories. This is the most autobiographical film of the tetralogy. We follow me as a little boy visiting my old school and my grandmother’s house. We see my character growing up, until he is so old that he is actually dead. It is a film about my past and future.”

Though he linked characters and stories across all his work, music was really the seminal influence in his expansive creative vision. “Music has always been a driving force in my work,” he noted. ‘It all began with a series of rock 'n' roll songs that I wrote since 1995. The entire tetralogy is based on four Thee Wreckers songs. The films show what the music looks like.”

The festival also premiered the short behind-the-scenes documentary Everything’s Different, Nothing Has Changed, a 20-minute short by Rob Gradisen and Joao Costa that covers 25 years of Rosto’s musical journeys and provides insights into why it took 10 years to complete the tetralogy.