As part of his Animation Hotline project, New York-based animator and documentary filmmaker Dustin Grella joins this month’s Sundance Film Festival to animate hotline videos live throughout the course of the festival. 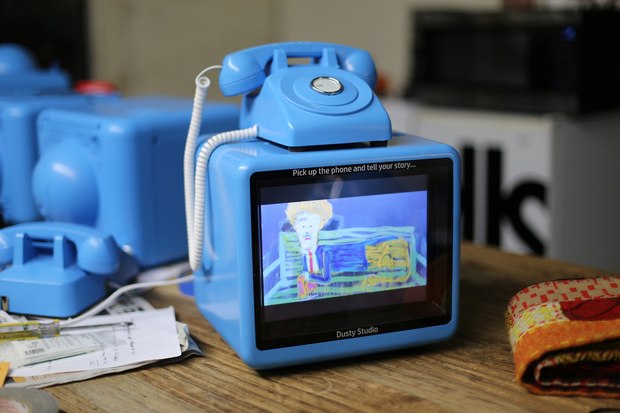 New York-based animator and documentary filmmaker Dustin Grella was asked to join this month’s Sundance Film Festival to animate hotline videos live throughout the course of the festival, which runs this year January 16-26.

Grella’s work has screened at the Cannes Film Festival, the Sundance Film Festival, and won the Walt Disney Award at the Ottawa International Animation Festival. His film, Prayers for Peace, screened at almost two hundred festivals worldwide and won over forty awards. He has written and mailed himself a letter every day for the past eleven years and has over 4,250 sealed letters neatly filed and categorized.

He is currently in production of the Animation Hotline, a series of micro-animations that use crowd-sourced voicemail messages for content. This year, HP invited Grella to the HP Sundance House in downtown Park City, UT, where he has been animating anonymous voicemail messages left during the festival with the goal of creating 10 new animations.

Five blue Animation Hotline Hotspots have been placed around the festival for participants to use. The Hotspots are television-telephone combinations that allow the viewer to watch the previous Animation Hotline videos then, if they feel so inspired, pick up the attached phone and leave their own message. Some messages are then chosen to be animated and then put back on the televisions (as well as the internet at animationhotline.com) to be viewed.