Denis Villeneuve’s sci-fi epic scored a hefty 6 wins, though the evening’s most momentous achievement was an unwanted, violent reminder that live TV never goes as planned... or hoped. 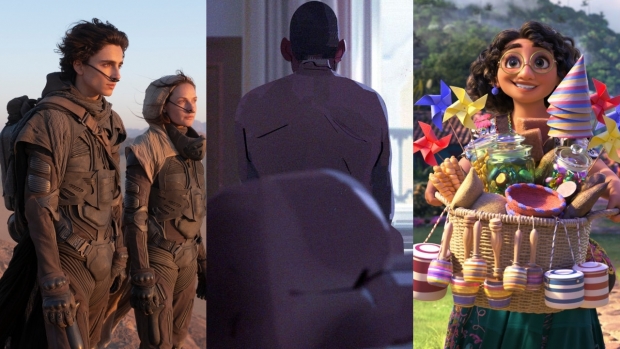 The 2022 awards season finally came to an end last night, punctuated by the slap heard round the world and Twitterverse, which unfortunately overshadowed wins and emotional acceptance speeches from so many talented artists. Last night's 94th Academy Awards telecast was many things, to many people, almost all not the focus of this final awards news post for AWN. Say what you will about a mean, rather nasty joke made at actress Jada Pinkett Smith’s expense from her longtime Madagascar franchise castmate, comedian Chris Rock. Her husband Will Smith’s subsequent violent verbal and physical assault of Rock is not the answer, not today, not any day… that it went unanswered, with Smith’s subsequent win for Best Actor taking a strange, almost surreal center stage… that he was allowed to even stay in the building says much about ABC and the Academy. And us really. None of it good.

Despite the controversial cutting of eight craft awards from the live show, the telecast still managed to run 30 minutes long. Not sure what the message is there, but for the teams of nominees and eventual winners in those eight categories, that sad irony is another type of slap to the face. The winners in those categories were taped between 4-5 pm, with their awards presented as snippets over the course of the main ceremony. To those winners (noted below) in the categories of Sound, Film Editing, Makeup and Hairstyling, Original Score, Production Design, Documentary Short, Animated Short and Live Action Short, we salute your work with the respect it deserves, with hopes last night was the first and only Academy Awards ceremony where such achievements received barely anecdotal recognition.

Speaking of Animated Shorts, Alberto Mielgo and Leo Sanchez’s The Windshield Wiper took home the Oscar, a category with five strong, well-made films and no clear favorite. In accepting the award, Mielgo said, "Animation is an art that includes every single art that you can imagine, and animation for adults is a fact, it’s happening. Let’s call it cinema. I’m very honored, because this is just the beginning of what we can do with animation." Sanchez added, "I just want to second that, thank you to all the team that has been involved with this project to make it happen, starting with Alberto and his vision, it’s just amazing. Thank you to the Academy for this award, it’s just incredible, thank you very much…"

That coveted VFX Oscar went to Paul Lambert, Tristan Myles, Brian Connor, and Gerd Nefzer. The win was Lambert’s third (he previously won for First Man and Blade Runner 2049), the second for Myles (also a winner for First Man) and Nefzer (a winner for Blade Runner 2049) and first for Connor. The four also won, among other recent awards, this year’s BAFTA for Best Achievement in Special Effects.

“What an amazing evening,” Lambert shared. “Congratulations to all the VFX facilities involved but a special thank you to the team at Wylie Co. The creativity and technical know how of everybody involved really made the post production on Dune seamless. Can’t wait to do it again!!”

In a Twitter post, Bush wrote, "So much to be thankful for tonight, but the best was celebrating with La Familia Madrigal. Beyond grateful for all those who helped create #Encanto - and all the fans who found themselves in our story. We share this with you!"

Congratulations to all the 94th Academy Award nominees and winners (marked in bold) in the complete list below:

Performance by an actor in a leading role

Performance by an actor in a supporting role

Performance by an actress in a leading role

Performance by an actress in a supporting role

Achievement in makeup and hairstyling

Best motion picture of the year