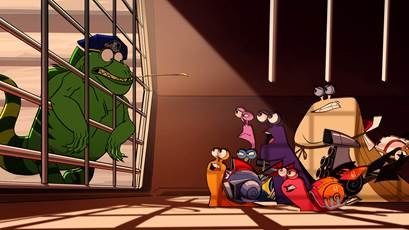 King Julien has officially decreed that Turbo and his Fast Action Stunt Team cannot hog all the extreme fun. In an effort to appease the lively lemur from Madagascar, DreamWorks Animation and Netflix are announcing three new original series to debut on the world’s leading Internet television network in late 2014: King Julien (in his very own show, of course), Puss in Boots (the legendary cat has nine lives worth of stories to be told) and Veggie Tales in the House (new recipes for faith-based values as Bob and Larry venture off the counter top).

Not to be outdone, Turbo and the team are revving their engines for all new episodes from the first season of Turbo FAST, available for streaming on April 4.  Netflix’s first original series for kids launched Christmas last year and became an instant favorite across the world. Families in the U.S and Canada can also now catch up on the back story of all the speedy snails with the arrival of the feature film Turbo on Netflix.

“We are having a ton of fun creating this new content for Netflix" said Margie Cohn, Head of Television at DreamWorks Animation. “There is so much richness to be found within each show world and a wealth of comic opportunity to entertain fans of DreamWorks in new and surprising ways.”

“I am pretty sure this is the first time the word ‘beloved’ has been applied to a cat, a lemur, vegetables and snails in the same sentence, but DreamWorks Animation has an incredible knack for creating characters that kids around the world adore,” said Cindy Holland, Netflix Vice President, Original Content. “We’re very excited to launch the new episodes of Turbo FAST in the coming weeks, and the three new series by the end of the year.”