Celebrate six brand-new episodes on Peacock and Hulu with three short clips and a trailer featuring the series’ lovable friends! 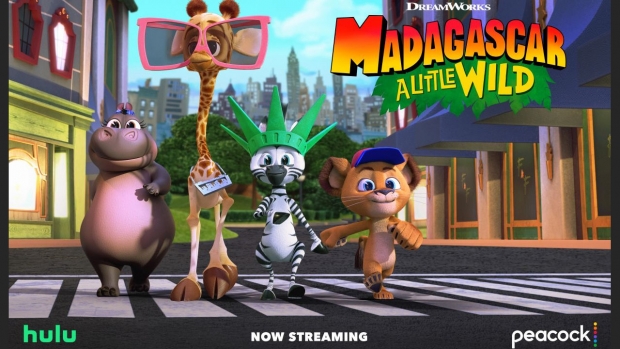 DreamWorks Animation’s new animated kids’ series, Madagascar: A Little Wild, is back with another season. Alex, Marty, Melman, and Gloria continue their big adventures in New York City. The foursome become babysitters for a new litter of tiny hedgehogs, Melman gets stuck in a firetruck, and Alex is accidentally mistaken for a large house cat. While their shenanigans may lead to sticky situations, the little pals always work together and make the best of whatever life throws their way.

To celebrate the launch of Season 2 on Peacock and Hulu, DreamWorks Animation has dropped 3 cute clips featuring the series loveable friends, Alex the Lion, Marty the Zebra, Melman the Giraffe and Gloria the Hippo. Check them out!

“CupKate” - It’s Kate’s birthday, and the zoo crew is on a mission to get her a sweet surprise!

“Pickles, Dave and Kate” – Pickles and Dave are up to some monkey business on Kate’s birthday!

From executive producer Johanna Stein (Kung Fu Panda: The Paws of Destiny) and co-executive producer Dana Starfield (Monster High: Welcome to Monster High), and inspired by the blockbuster franchise, Madagascar, DreamWorks Madagascar: A Little Wild showcases the team as kids residing in their rescue habitat at the Central Park Zoo. They might be small, but like everybody who lands in New York City, these little guys have big dreams and Madagascar: A Little Wild will follow all of their adventures.