For executive producer Doug Langdale, bold colors and a 2D/CG production process helps transport ‘Cleo’ into a high school 30,000 years in the future. 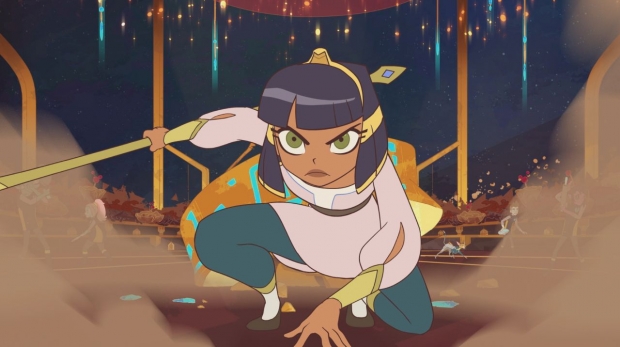 Premiering today as part of NBCUniversal’s entry into the expanding streaming service business, Peacock, is the new original DreamWorks Animation series, Cleopatra in Space, one of three animated Peacock Originals launching on the platform.

Cleopatra in Space is based on the award-winning graphic novel series by Mike Maihack and executive produced by Doug Langdale (The Adventures of Puss in Boots) and Scott Kreamer (Kung Fu Panda: Legends of Awesomeness). The 12-episode comedic adventure focuses on the untold story of Cleopatra’s teenage years; “Cleo” is transported 30,000 years into the future, to an Egyptian-themed planet that is ruled by talking cats and where she discovers she is the prophesied savior of the future world. In order to prepare for her role and mission, Cleo is sent to an elite academy where she has to train to take on the bad guys, figure out how to eventually get herself back home to Egypt, as well as tackle the highs and lows of being a teenager in high school.

For Langdale, the long visual development process eventually allowed the show to sport a design style quite close to what you’ll find in Mailhack’s graphic novels. “Often, in CG shows, we’ll use a 2D style for things like flashbacks and fantasies, and having worked on a few shows that made use of this, I’ve gotten to really like it,” he says. “So even though this is a 2D show, it contains elements I keep referring to as ‘2D flashbacks,’ in which we use a flatter, more limited animation style. As the series goes on, you’ll see even more stylistic variations in these sequences. For instance, there’s a whole sequence that looks like it was drawn by a small child, and a couple that have cute, ‘Chibi’ versions of the characters.”

As for the show’s bold color scheme, Langdale notes, “We wanted a visual style that was going to be fun to look at, so we went with a lot of purples and bold colors. Early on we decided we wanted the characters to have uniforms at the Academy, but we also didn’t want them all dressed alike, so we came up with the idea to have the Academy divided into three areas of specialization that are identified by color, and also decided that the students are allowed to personalize their uniforms as long as they make use of those three colors. We never actually mention any of this color division stuff in the show, by the way, but having these unmentioned underlying organizational aspects gives the show more of a feeling of taking place in a real world.” “Animation is hard!” the executive producer continues, noting he had to learn new ways to design that optimized, rather than hindered, the show’s production. “Everything is a challenge. One specific challenge we faced was a bit of a learning curve with the digital 2D animation, specifically for me! At the beginning, we kept designing characters with details that interfered with the way the characters are animated. Part of the goal, of course, is to not redraw too many details of the figure in order to make maximum use of the software in executing the animation. Finally we had to get a tutorial video from one of the animators to show us, for instance, how to design uniform details on a shoulder so that you don’t have to redraw a million little bits of it every time the arm moves. Like, ‘Put a line HERE, not across HERE.’ Once you see someone actually doing the work of animating the character you realize how different digital 2D is from conventionally hand-drawn 2D, and you start to understand how you can avoid constantly getting in the way of the animation process.”