Produced in Korea at EMation, NE4U and Dong Woo Animation for Netflix, new 2D-animated series is executive produced by Brendan Hay of ‘The Simpsons’ and ‘Robot Chicken’ fame. 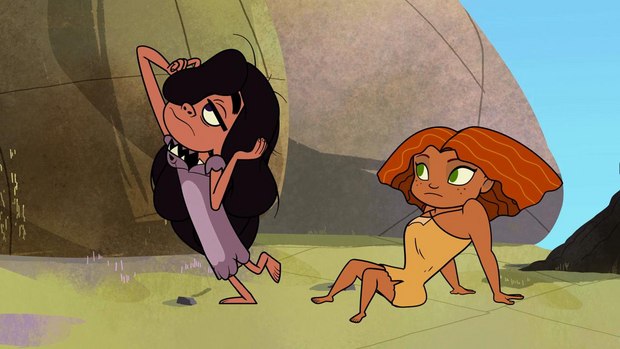 History's favorite first family is back in the all-new original family sitcom Dawn of the Croods from DreamWorks Animation premiering worldwide on Netflix on December 24.

Based on the 2013 CG-animated feature The Croods, directed by Kirk DeMicco and Chris Sanders, the new 2D-animated series joins Netflix originals such as Turbo F.A.S.T., Dragons: Race to the Edge, Adventures of Puss in Boots and The New Mr. Peabody & Sherman Show. This new show deals with modern-day problems -- such as discovering school, a sugar rush or an eye roll -- occurring in history for the first time ever.

Eep, Grug, Thunk, Ugga, Sandy and Gran are back and funnier than ever in this all-new family sitcom. Follow everyone's favorite family as they meet new friends, outrun new creatures and encounter “firsts” the world has never seen -- such as school, slumber parties, hiccups and elections. The Croods are discovering them all.

Check out a sneak peek of the new show in the player below:

While the animated film featured the voices of Nicolas Cage and Emma Stone, the voice cast for the new Netflix series includes Dan Milano, Cree Summer and Stephanie Lemelin, as well as Saturday Night Live alums Chris Parnell, Ana Gasteyer and Laraine Newman. Part of a long-term agreement between Netflix and DreamWorks Animation for 300 hours of original content, Dawn of the Croods is executive produced by Brendan Hay of Robot Chicken and The Simpsons fame and is animated in Korea at EMation, NE4U and Dong Woo Animation.