Inspired by the hit film, ‘The Croods: A New Age,’ the CG animated series follows the Croods and the Bettermans, sparring rivals who overcome their differences to become the unlikeliest of friends; six all-new episodes hit Peacock and Hulu on November 25. 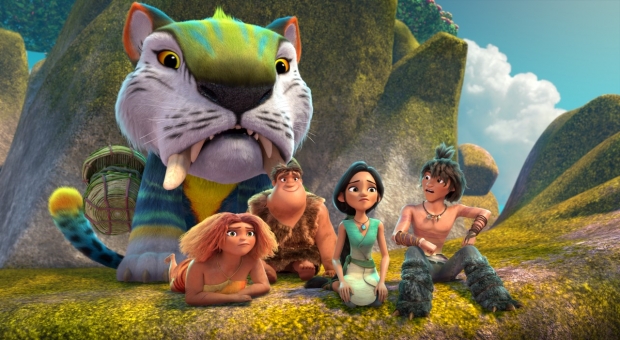 DreamWorks Animation has just released a new trailer, and a bunch of images, in anticipation of the upcoming release of six new episodes of the popular CG animated series, The Croods: Family Tree - coming to Hulu and Peacock November 25.

In the new episodes, it’s a blast from the past when the Croods find a man frozen in a block of ice, thaw him, and discover he was an old flame of Gran's! When Grug saves Hope's life during a dangerous mountainside tartichoke harvest, rather than feeling grateful, Hope is desperate to save Grug's life in return, so she won’t be indebted to him. And Ugga is determined to show Hope she's just as good a cook and decides to cook a meal that will wow the farm residents. But when Ugga realizes she's out of her element, she turns to an unlikely place for help: the punch monkeys.

Inspired by the hit animated comedy, The Croods: A New Age, the series continues the ever-evolving story of the Croods and the Bettermans as they learn to live together on the most idyllic farm in prehistory. Their journey from sparring rivals to unlikely friends is fraught with misadventures as the two families slowly overcome their differences to turn a tree house divided into a tree home united.