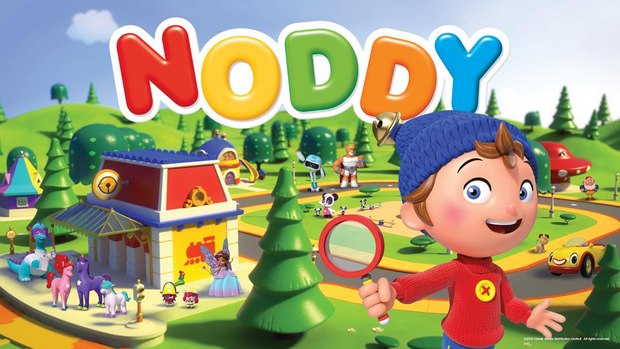 GLENDALE, CA -- DreamWorks Animation has announced the premiere of its first original preschool series, Noddy Toyland Detective. The series will premiere on Sprout, NBCUniversal Cable Entertainment’s 24-hour preschool network, this fall. Co-produced by DreamWorks Animation and Gaumont Animation, the CG-animated series follows a young boy named Noddy and his friends as they embark on interactive adventures to solve mysteries in the colorful world of Toyland.

Toyland is a fabulous world, filled with an imaginative cast of characters ranging from dinosaurs and trains to unicorns, robots and pirates. In Noddy Toyland Detective, Toyland’s most famous resident, Noddy, is stepping into the new role of detective. If there’s something lost, missing or unusual happening in Toyland, Noddy and his best friends, Bumpy Dog and Revs the car, are the investigating dream team who find out what’s going on and how to make things right. With the help of his Who-What-Where tablet, Noddy takes preschoolers on interactive adventures as he asks questions and uncovers clues to solve the mysteries of Toyland and save the day. Each episode is filled with music, mystery, friendship and fun to keep kids entertained all while learning how to investigate their own world. “We couldn’t be happier that Sprout will be bringing DreamWorks’ Noddy Toyland Detective to US audiences this fall,” said Eric Ellenbogen, Co-Head of International TV for DreamWorks Animation. “Sprout is a premiere destination for preschool programming, making it the ideal U.S. home for this exciting new series. The world of Noddy and Toyland, with its great literary legacy, offers so much to the imagination of kids."

"Sprout couldn't be prouder to be the exclusive US home for Noddy Toyland Detective," added Amy Friedman, SVP, Programming & Development at Sprout. “DreamWorks has delivered not only a fresh, modern world, but also a role model for our viewers. Noddy himself is curious, resilient, and kind - three values we care deeply about at Sprout.” Based on the classic character created by renowned children’s author Enid Blyton in 1949, Noddy is one of the most beloved children’s characters around the world, having entertained families for generations with stories set in the colourful world of Toyland. Noddy was first published in Noddy Goes to Toyland in 1949, and remains one of the most beloved characters worldwide. His television debut came in 1954 with The Adventures of Noddy and, in the same year, Noddy in Toyland appeared on the London stage. Noddy’s popularity took him to France in 1963 where he is known as Oui-Oui and remains a perennial favorite.

In addition to the new series, Noddy television programming encompasses a vast library consisting of more than 250 episodes. On TV, Noddy has been seen in more than 100 countries, and more than 250 million Noddy books have been sold worldwide.