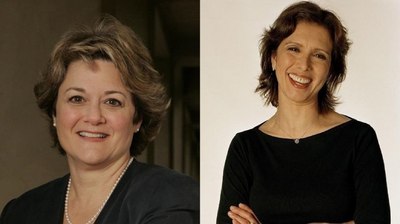 GLENDALE, CA -- DreamWorks Animation announced that it has appointed two veteran producers, Bonnie Arnold and Mireille Soria, as co-presidents of feature animation. In their new roles, Arnold and Soria, respectively the lead producers behind the studio's How to Train Your Dragon and Madagascar franchises, will oversee creative development and production for DreamWorks Animation's theatrical releases. Between them, they have produced eight films at DreamWorks that have grossed more than $3.5 billion globally. As part of this transition, chief creative officer Bill Damaschke will step down from his position.

"Mireille and Bonnie are two of the most accomplished and prolific filmmakers working in feature animation today," said DreamWorks Animation Chief Executive Officer Jeffrey Katzenberg. "I am confident in their ability to marshal the extensive creative resources available at our studio and lead DreamWorks's vast ranks of artists and filmmakers as they produce the highest quality entertainment."

"As two of our most successful producers, Bonnie and Mireille bring substantial expertise to this new and well deserved leadership role at the studio," said Ann Daly, DreamWorks Animation President. "Having worked alongside them both for many years at DreamWorks, I am thrilled that these established industry veterans will be providing creative oversight to our entire film slate."

"Great storytelling is the heart of DreamWorks Animation, and we are honored and excited to help shape the movies that will entertain audiences around the world," said Arnold and Soria in a joint statement. "DreamWorks has long been our home, and we can't wait to begin working with all of the studio's outstanding filmmakers and artists!"

Arnold is a twelve-year veteran at DreamWorks Animation with 31 years of filmmaking experience. She currently oversees DreamWorks Animation's How to Train Your Dragon film franchise, the first two installments of which have grossed more than $1.1 billion at the worldwide box office. The original How to Train Your Dragon received two Academy Award nominations in 2010, including one for Best Animated Feature, as well as a Golden Globe nomination in the same category. How to Train Your Dragon 2, the highest grossing animated film of 2014 also received a Golden Globe nomination for Best Animated Feature Film and is currently receiving praise as one of the best reviewed films of the year. In addition, Arnold produced the 2006 DreamWorks Animation release Over the Hedge, the Disney blockbuster Tarzan and the history-making film Toy Story, which combined have earned more than $1 billion in worldwide box office. An accomplished filmmaker in nearly every genre, she produced the Sony Pictures Classics release The Last Station, which garnered two Oscar nominations as well as nominations from the Screen Actors Guild; the Golden Globes; and the Independent Spirit Awards, including a nomination for Best Picture.

Soria also has 31 years of production leadership experience, including fifteen at DreamWorks Animation where has overseen the successful Madagascar franchise, including three films that collectively have grossed nearly $1.9 billion at the worldwide box office. She also produced the Academy Award-nominated animated adventure Spirit: Stallion of the Cimarron following a successful career developing and producing a varied group of live-action feature film and television projects. Prior to joining DreamWorks Animation, Mireille held a deal at Fox Family Pictures, where she produced the romantic Cinderella story Ever After. She had previously held the post of vice president of production for Walt Disney Pictures. During her tenure, she oversaw the development and production of such projects as The Mighty Ducks and its two sequels, Cool Runnings and the live-action version of Rudyard Kipling's The Jungle Book.