Shares of DreamWorks Animation fall on Monday as Wall Street analysts weigh in on the performance of the studio's newest release. 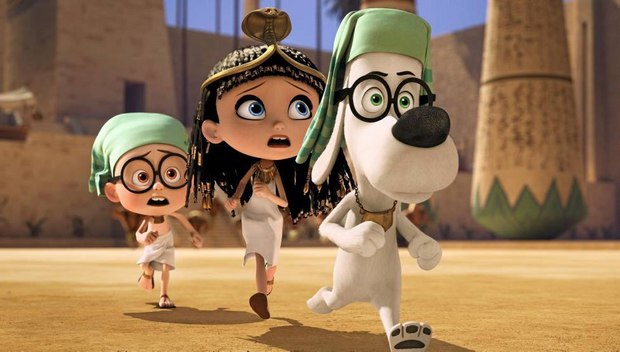 Wall Street analysts are forecasting a loss for DreamWorks Animation after Mr. Peabody & Sherman took in a “lackluster” $32.5 million in estimated earnings over the weekend, according to a report by The Hollywood Reporter. The news reportedly caused the company’s stock to drop 1.4 percent.

Stern Agee analyst Vasily Karasyov predicts Peabody will eventually earn $310 million at the global box office, which would translate to an $84 million write-down. Karasyov has an “underperform” rating on DWA and $17 price target, whereas shares closed at $29.05 on Monday.

“DWA's latest release is on track to become the third original title of the last four to lose money,” Karasyov wrote in a note to clients on Monday, noting that he planned to revise down his estimates for future original releases because “the appeal of the properties created by DWA is declining.”

Karasyov figures that the last four original titles -- Rise of the Guardians, The Croods, Turbo and Peabody -- have lost DWA a combined $159 million.

Meanwhile, analysts at Cowen and Co. reduced their price target on DWA to $21 from $35.

Eric Wold at B. Riley raised his price target to $37 from $32 and upgraded the stock to “buy” because shares are down 11 percent since January 30. Wold notes DWA's focus for the next 18 months will be on “known franchises,” starting with How to Train Your Dragon 2 in June, then Penguins of Madagascar next March and Kung Fu Panda 3 in December 2015.