Nina West and Dan Lund team up again on an animated short inspired by their love of musicals; the made from home film asks people to ‘Mask up, Stay home, and Watch a Musical.’ 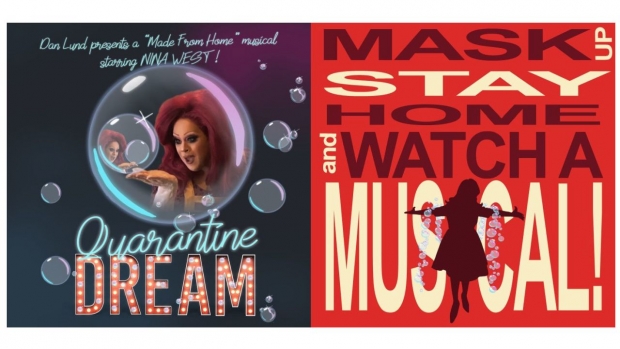 For veteran Walt Disney animator Dan Lund (Frozen, Frozen 2) and drag icon Nina West (RuPaul's Drag Race), their shared love of musicals, and Zoom, brought the two artists together to create a film; in their new live-action / animated short film, Quarantine Dream, the pair teamed up to ask people to “Mask up, Stay home, and Watch a Musical.”

Produced by the pair at their respective homes as the COVD-19 lockdowns took hold across the world, the 3 ½ minute short was born out of difficulties faced by months of quarantine isolation. It tells the treasured story that imagination can lead you anywhere, and if you let it, you can still have an adventure no matter the circumstance.

Shot entirely from home during the second week of isolation in March 2020, with West in Columbus, Ohio using an iPhone, and Lund directing via Zoom from Burbank, Quarantine Dream pulls inspiration from the duos shared love for classic Disney movies like Mary Poppins, that seamlessly combine live-action and animation to create a timeless, charming escape.

Having previously collaborated on the Oscar shortlisted animated short Coaster, the two had hoped to work together again, but never expected it to happen while quarantined at home during a pandemic. Without normal production resources, they embraced the limitations to flex their creative elbow grease to bring something new to life.

“When I first reached out to Nina, I had no idea what we were going to make!” commented Lund. “I just knew I wanted it to feel joyful and have that Magical Disney feel! It became so much more than what we set out to do. It became a metaphor for any feeling of isolation and how we have the power to create and execute anything our hearts desire without barriers. It made us feel good to make and now we hope it can bring that same feeling of joy, positivity and hope to you at home!’

“I feel like I am my very own self-made Disney princess of sorts now!” added West. “I mean, Mary Poppins and Bert got to dance with penguins, and thanks to Dan, I get to dance with bubbles. It is so wonderful and beautiful!”