Drac and Pack are Back in ‘Hotel Transylvania: Transformania’ Trailer 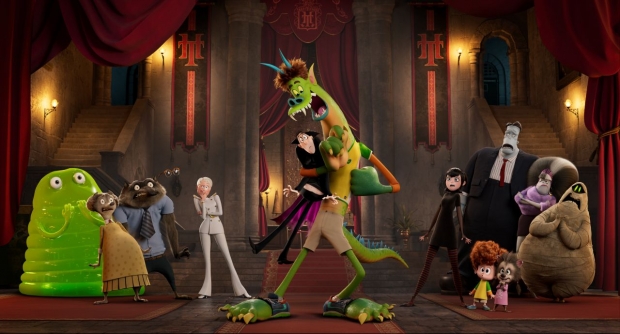 The film reunites your favorite monsters for an all-new adventure that presents Drac with his most terrifying task yet. Van Helsing’s mysterious invention, the “Monsterfication Ray," goes haywire; Drac and pals are all transformed into humans, and Johnny gets his kind-of wish… and becomes a monster! In their new mismatched bodies, Drac, stripped of his powers, and an exuberant Johnny, loving life as a monster, must team up and race across the globe to find a cure before it’s too late, and before they drive each other crazy. With help from Mavis and the hilariously human Drac Pack, the heat is on to find a way to switch themselves back before their transformations become permanent.

According to Drymon, the germ of the transformation idea was there from the very beginning of discussions about a fourth film. “The conflict of what it means to be a monster versus what it means to be human has been present through each of the movies. Is Mavis going to fall in love with a human? Is my grandchild going to be a human or monster? Tension like that has been there in all the movies. Wanting to bring the franchise full circle and return to the Drac / Johnny relationship, the idea of turning Johnny into a monster, who has been the only human in this world of monsters, seemed really natural.”

Kluska adds, “Then the idea began to evolve. What if we turned that duality of Johnny and Drac into more of a body swap, and from there, well, why don't we take all the characters and see them in a place we've never seen them before. So, that core idea of transformation was really like the germ of the movie from the very beginning.”

Describing the film’s returning all-star cast, Kluska continues, “Honestly, it's an embarrassment of riches. The cast is amazing. From seasoned actors to these amazing comedians, it’s been absolutely crazy. And the fact that we're taking these characters to a really weird place… they've been so much fun to work with.”

“During recording sessions, for example, you give a punchline to David Spade [the Invisible Man] and he just goes to town with it,” Drymon says. “A lot of the Invisible Man’s lines in the movie were David Spade ad-libs, just kind of off the cuff stuff we wound up loving and then bringing into the movie. So, you know, we're just lucky to have people of that caliber who can just be funny off the top of their head. Luckily, you're recording it and can grab it and get a joke for free.”

Though Tartakovsky handed off the director role to Kluska and Drymon, he wrote the story, co-wrote the screenplay, and executive produced.  “Genndy’s got the experience from creating and directing the three movies of Hotel Transylvania’s universe,” Drymon explains. “It's his world. You’re kind of walking into his house, and have to be respectful of that. But he’s been supportive and helpful getting us up, running and fitting into the Hotel Transylvania world. At the same time, he was always open to new ideas and things we brought in. And if it were funny, if it worked, he would go for it. So, it was surprisingly seamless for us to all work together. He and Jennifer have been amazing and awesome to work with.”