Revenues fell to INR1828 million (US$285.9 million) from INR2397 million (US$376.4 million) due to a slowdown in production and delay in the commencement of new projects. However, due to cost efficiencies, operating profit before tax, finance costs and foreign exchange is up by 33 percent compared to last year. The company posts an after-tax loss of INR202 million (US$317.2 million) against last year’s profit of INR376 million (US$590.5 million).

The reduction in turnover is primarily due to a slowdown in production and delay in the commencement of new projects. However, due to cost efficiencies, operating profit before tax, finance costs and foreign exchange is up by 33 percent compared to last year.

Five companies have cleared all the payments, while the balance debtors are paying up the amounts as committed. The company is now very hopeful of recovering most of the aged debtors of over 240 days in the current financial year. 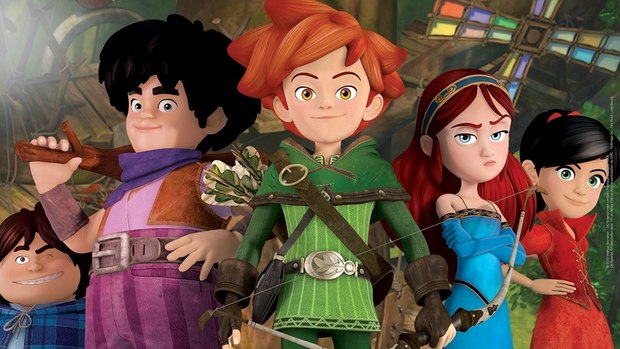 “The media and entertainment industry is undergoing a deep transformation,” commented DQE chairman and CEO Tapaas Chakravarti. “New platforms and ways to access and consume entertainment are redefining the rules of the game. On the other hand, newer delivery platforms impose new challenges relating to rights management, delivery formats and consumption behavior. We are focused on adapting our business model with strategies to remain competitive on a global scale. Flexibility, adaptability and scalability have become more critical than ever. Our focus on developing IP ownership for global audiences with international marquee partners has forged the way for additional revenue streams to accelerate growth and profitability.”

Reade the full report on DQE’s Animation, VFX, Digital, and Licensing and Distribution divisions below:

Our teams continue to deliver high quality CGI and traditional TV series. In FY 2014-15 we have completed the production of several high quality shows and also commenced several new productions. These include Sheriff Callies' Wild West, a work-for-hire series being produced for Disney Junior, and 7 Dwarfs and Me, a unique hybrid TV show combining CGI characters and backgrounds with live action sequences with real actors which is being produced with Method Animation France.

Some of the other projects in production include Peter Pan season II, Miles from Tomorrow Land, Popples, 7 Dwarfs and Me and Shabiyat, while production of new IPs such as 5 & IT, Robin Hood - Mischief in Sherwood Season 2, Wind in the Willows and Pinocchio - The After Story, will commence soon.

DQE currently has a production order book worth approximately $76 million for the next 30 months.

DQE recently secured up to US$50m from the issue of senior secured convertible bonds, mainly to fund the development of owned-intellectual property and co-production projects currently in the pipeline for production over the next two years, which are set out above.

The foray by your company into VFX for live action films has been successful with the team successfully producing VFX for several domestic live action films. The VFX pipeline has been strengthened with the addition of highly skilled talent, ready to take on international VFX film works in the near future. The Company has completed 5 projects in VFX and 3 more are currently in productions.

DQE has been distributing and licensing content owned and produced by the Company as well as co-produced content for which we hold rights in certain territories. The performance has been satisfactory with more than 37 audio visual distribution deals and 14 licensing and merchandising deals worth US$6.29 million signed in FY 14-15 and US$4.0 million worth and more in the pipeline.

Going forward we strive to focus more on the revenues derived from licensing and merchandising for our owned and co-owned properties. With the recently concluded deal with Discovery family channel in the United States, we are confident of achieving success in this market which represents a large potential in terms of licensing revenues globally.

Among many other initiatives, our digital kids entertainment channels launched during the  last quarter of 2014 have gathered momentum and are generating revenues. Power Kids and Tiny Toonz are expanding their subscriber bases on a continual basis. Power Kids showcases animated content for children aged five and above, whereas Tiny Toonz is aimed at younger children. Both channels have now started to gain traction and have witnessed over 150,000 average daily online views resulting in increased revenues through both these channels.